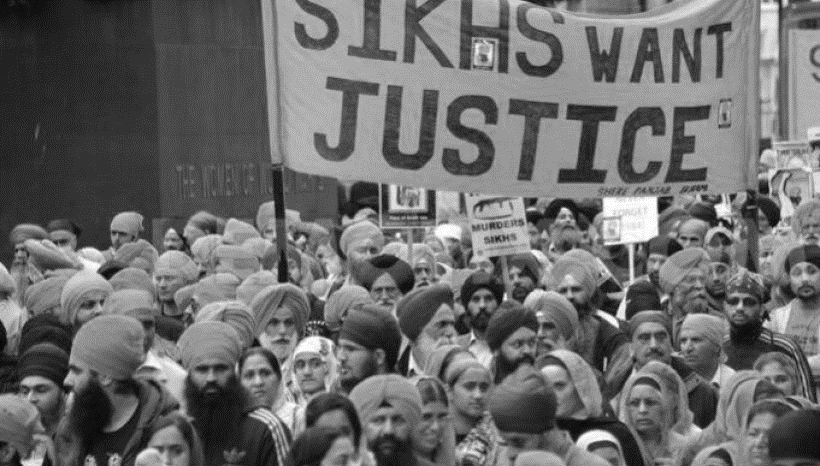 Journalists including those from reputed organizations across the world such as Michael Hamlyn from the Times were picked up from their hotels early morning and taken across the border and abandoned somewhere in Haryana. Those who managed to find their way back were threatened to be shot. Indian nationals working with foreign media were also barred from entering. This was a planned action by the Indian Government to ensure the magnitude of their unjust actions do not go outside of the walls of Punjab. All main towns were under curfew and all forms of communication was stopped, alienating Punjab from the rest of the world

In what was one of the most outrageous acts, considering the hundreds of Sikh lives that were lost, Indian soldiers and generals were bestowed with honors, gallantry awards, promotions and decoration strips for their “bravery”. One would ideally look at this entire operation as a blind torture and massacre of a minority community. To make it more painful, the awards were presented by Indian president Zail Singh, a Sikh himself.

The UK Government under the leadership of Prime Minister Margaret Thatcher was reported to have had full knowledge of the Indian Government’s intention to storm the Golden Temple. The UK had also sent its officers to work with the Indian authorities and advise them on going about the strike. The arms deal with India was the primary reason for UK to take India’s side, so as to preserve its interests at the cost of an entire community, who are one of the most proactive ones in their country.

The entire operation has been criticized for what could have been undertaken by a blockade approach as was done during Operation Black Thunder where under similar circumstances, Sikhs had taken over the temple complex. This would have averted deaths of hundreds of innocents. But India played this smart and used this as an opportunity to terminate formidable forces like Bhindranwale and Shahbeg Singh. Intelligence suggested that even factors such as stocking of water and essentials by Sikh fighters was seen as a move towards a prolonged battle by them with India. Sikh fighters were criticized for having machine guns and other armor, which was kept for self defense and with very clear knowledge that the entire Sikh community was under the threat of being wiped out by the Indian Government. If intentions were true, a simple blockade approach could have been undertaken.