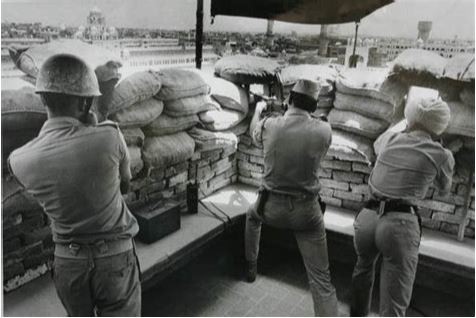 Operation Blue Star was a very clearly designed operation from the very beginning – the timing, the casualties, the damage to property and the brutality of the entire operation.

Considering how holy the martyrdom day of Guru Arjan Dev is to the Sikhs, it was indeed a planned move by the Indian Government to target the very same day, when thousands of Sikh pilgrims would be visiting the Temple and to eradicate them for good. Not just this, Longowal had also announced a statewide civil disobedience movement on the 3rd of June 1984 where movement of essentials such as grains out of Punjab were not permitted thereby curtailing demand and causing more anxiety and distress.

The Indian Government of course cited coincidence as the reason for the operation to be carried out on the holy day for the Sikhs. It is an absolute no brainer than tons of casualties could have been prevented just by not having the mission planned for the same day.

India was also worried about the fact that Pakistan, already having played a beneficial role to the Sikhs may end up being the favorites over them, especially considering their advocacy for Khalistan. Khalistani currency were already made and circulated. And a declaration such as this would have resulted in forces from the Punjab Police and Army to also side with their own community. All of this was considered a threat for India.

Pakistan has for long aspired to support Indian Sikhs and has been vocal about taking over Sikh Punjab and turning it into Khalistan. Pakistani officials have for long worked towards reversing the traditional antipathy between Sikhs and Muslims arising from the partition by restoring Sikh shrines in Pakistan.

In 2006, Khalid Awan, a Muslim and Canadian of Pakistani descent, took empathy to the Sikh cause and supported with financial assistance to the Khalistan Commando Force in Pakistan. Owing to his frequent travels to Pakistan, an American Court convicted him of supporting terrorism, tying with him links to Sikh and Muslim extremists.

In 2008 as well, Pakistan’s assistance to the Sikh community was flagged off as a potential hazard for India by India’s Intelligence Bureau.