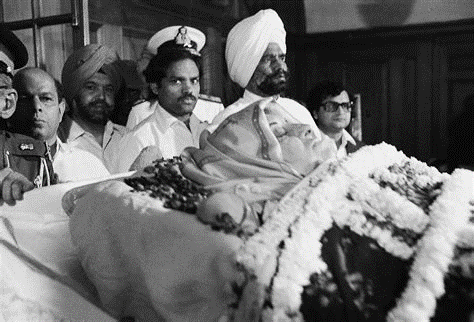 While Sikhs were still reeling from the agony and loss faced during the massacre, India was quick to cripple the community with series of blows. In what seemed like a reenactment of Ahmad Shah Abdali’s invasion of India where he destroyed every Gurudwara he came across, India attacked 40 Gurudwaras all over Punjab.

Indian Sikh soldiers in the Police force and Army stood up for their oppression. Nearly 5,000 of them rebelled against the Government. Veterans and former government officers who were recipients of various honorary awards returned them.

This attack only alleviated the secessionist movement and overnight Bhindranwale became a hero of the Sikh community across the world. Infact, more people died after Operation Blue Star in the years that followed.

Indian Prime Minister Indira Gandhi faced the wrath of her actions when she was assassinated by her two Sikh bodyguards – Beant Singh and Satwant Singh.In what continues till date in the form of anti-Sikh riots, more than 15,000 Sikhs were massacred across the country in the events that followed post Indira Gandhi’s death.

And all of this went on. As the police and army watched. As the Hindu community laughed. As the rest of India stayed mute. And above all, as the President of India, a Sikh himself didn’t lift a finger to support the Sikh cause.

The community has for decades now, endured every bit or torture, pain, oppression and has been constantly put down by every section of India. Sikhs are now making a name for themselves all over the world but till date, are targeted each time. Operation Blue Star is a haunting reminder to all Sikhs and one could still get goose bumps as they think about the events unfolding in their heads.