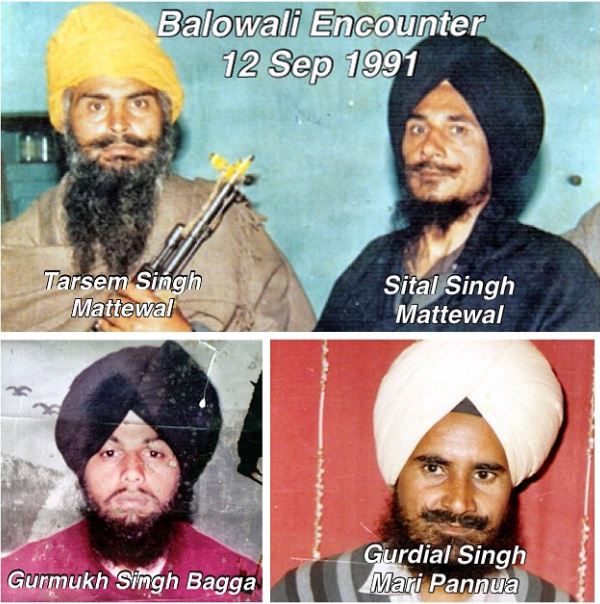 The Bolowali encounter is the encounter between 5 Khalistan Armed Force soldiers and 12,000 Indian Armed Force. All 5 were shaheed but caused much damage to the enemy. The hero in this battle was Seetal Singh Matewal, who joined the Bhindranwale Tiger Force of Khalistan in their quest for justice and freedom.

After Bhai Seetal Singh picked his sword in defence of Sikhs, the security forces began to harass his family and friends. But his determination and commitment to the Khalistan ideology was so strong that he never looked back. In order to take the movement to the next level, Bhai Seetal Singh Ji formed a new Jathebandi consisting of highly motivated young Sikh men and women, initially called the Khalistan Armed Force and later on as the Dashmesh Regiment.

One morning at Bolowali village in Majitha, nearly 14 hours since their last meal and while testing their weapons, members of the Jathebandi spotted several armored vehicles and jeeps with machine guns mounted on top. After having provided the men with food and while returning, the Indian member a young girl (sister of one of the members) and began to question and harass her. Witnessing this and unable to digest the harassment, the Sikhs opened fire.

Upon realizing that Bhai Seetal Singh was present there, more soldiers and armored vehicles began to arrive at the scene rather quickly.

With very limited ammunition and few weapons (one Draganov rifle, one GPM rifle, and three AK47 rifles), the five Sikhs took on the entire army of 12,000 Indian soldiers.

The Indian Army was not the only side that could call on reinforcements. As news spread from one village to the next, the Jhujahroo Singhs headed in the direction of the battlefield to fight alongside their brothers.

When morning broke the Indian Commanders began to see the devastating results of exchanging bullets with the Khalsa. The once green battlefield had become a mass graveyard of Indian troops as the stench of blood and death filled the air. But the Sikh brave hearts were beginning to run out of ammo and knew their time was almost round the corner.

In the end Bhai Gurnam Singh Ji ran out of bullets. This Singh had terrorized the Indian Army so much that even as he stood in the battlefield without any ammunition the soldiers were too scared to approach him. In a shameful ploy to kill Bhai Seetal Singh Ji, the Indian Army used the fatally wounded Bhai Gurnam Singh Ji as a human shield. As Bhai Sahib watched his brother in arms walk on the battlefield with Indian soldiers hiding behind him, he knew that if he began to shoot, Bhai Gurnam Singh Ji would be injured in the cross fire. The Indian Army took full advantage of this beautiful love between brothers as they riddled Bhai Seetal Singh Matewal’s chest with hundreds of bullets.

As Bhai Sahib began to make his final journey back to the home of his king he shouted out, ‘Khalistan Zindabad’, one last time.