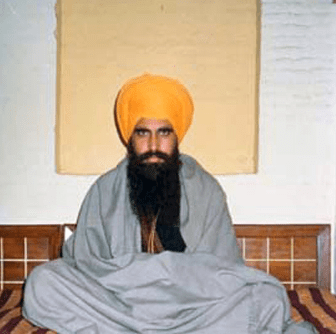 In a battle of good vs bad, Shiv Singh aka Chhiboo Ram, the Thanedar of the Chola Sahib village who was infamous for intimidating innocents by a misuse of his authority of being a police officer had to at some point face the wrath of Bhai Avtar Singh.

With his greed overpowering his decisions and a bounty on Bhai Avtar Singh, the Thanedar and his accomplices were tricked by Jathedar Durga Singh, who promised to have Bhai Avtar Singh delivered to the police. But ofcourse, this was swiftly brought to Avtar Singh’s attention because the entire community looked to Avtar Singh as their hero.

Bhai Surinder Singh Shinda went to the police station and asked to meet with the head authority. He fabricated a story as to how the members were enroute to Sarhali and that the informant would help identify the members so it can quietly be undertaken as a discreet mission without garnering too much attention.

Along with six other policemen, Chhiboo Ram commandeered a jeep and drove to Sarhali. When they reached a bridge near Sarhali, they spotted Bhai Avtar Singh and Jathedar Durga Singh who immediately opened fire and showered Chhiboo Ram with bullets, also killing the driver of the jeep. The remaining police officers were badly injured too and the Singhs removing their arms and ammunition, made their getaway.

The next day, newspapers reported an encounter at the bridge in which the Chola Sahib head of police, Shiv Singh had been killed along with 2 others. Four police officials were injured. The security forces surrounded the area but were unable to capture anyone. The Singhs slipped back into the swamps of the Mand.