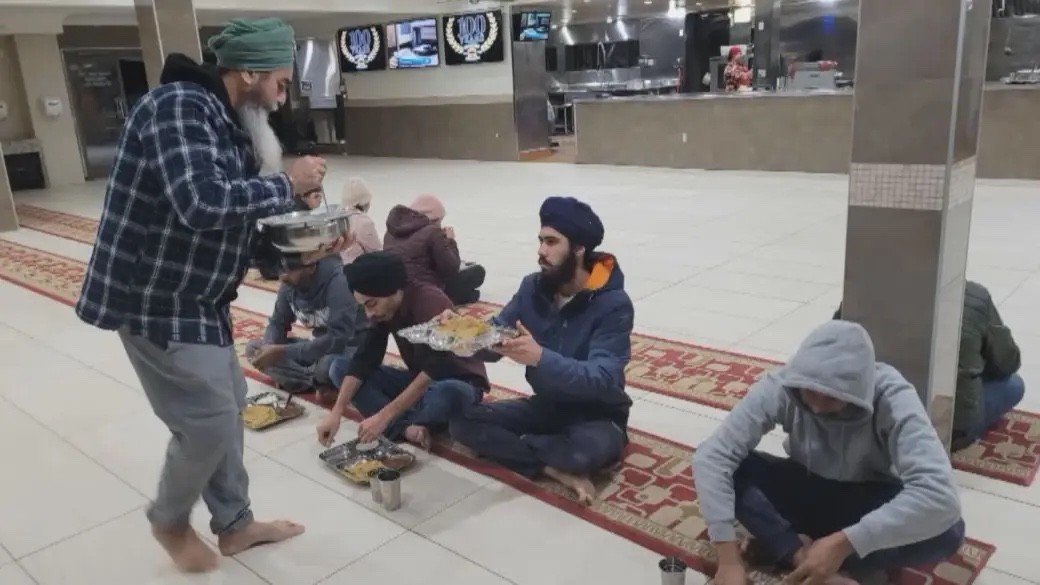 Tuesday night’s commute in the snow turned into a nightmare for many Metro Vancouver drivers, but in at least one instance it turned into a master class of service and community spirit.

Heavy snow, spinouts and blocked bridges and highways around the region left many people stuck in traffic overnight, in some cases shivering in their cars with the engine off.

That was the case on New Westminster’s Queensborough Bridge, where scores of vehicles were trapped on the bridge span and Highway 91A.

Among those stuck in the traffic jam were a group of volunteers with the Gurdwara Sahib Sukh Sagar Sikh temple, which happens to be adjacent to the bridge on the Queensborough side.

Around 6:30 p.m., after they’d already been stuck for a few hours, a group of them decided to make their way to the temple on foot to warm up and use the washroom, Amandeep Singh Garcha, spokesperson for the Khalsa Diwan Society of New Westminster told Global News.

“One of the volunteers got an idea because we are hungry and wanted tea … whatever is there we should take the stuff to the Queensborough bridge and we should start feeding people if they need it,” he said.

The group loaded up a large bucket with hot tea and packed up snacks and headed back out into the snow where they began providing relief to stranded motorosts.

Volunteers also offered to stay with people’s cars so they could head over to the temple and use the washroom or warm up.

“So some of our volunteers just stood near their car. If the traffic moved they could just drive their car,” Garcha added, noting that traffic remained frozen and no one actually had to get behind the wheel.

As the evening dragged on and the volunteers realized traffic was not moving, they decided to fire up the temple’s kitchen — which is used daily to provide free meals to the community — to begin feeding people trapped in their cars.

“We decided we should prepare 200 meals, 300 meals right away so we could feed maximum people when they need it. We just thought we have to do that,” Garcha said.

By midnight, he estimated they’d served about 200 people, and the hospitality didn’t stop there.

The Gurdwara opened its doors to anyone who wanted to sleep there and stay warm until traffic began moving on the bridge. About 65 people took them up on it, Garcha said.

The bridge eventually reopened around 3:30 a.m., he said, and people headed home.

While he hopes the temple doesn’t find itself at the centre of another emergency, Garcha said the volunteers were happy to help, and will do so again if they’re ever called upon.

“If this happens (again) we are there in Queensborough,” Garcha said.

“Whoever is listening on Global News, they are most welcome. Any time, 24 hours, the doors of the temples are open for washroom or refreshments and they can sleep as well.”