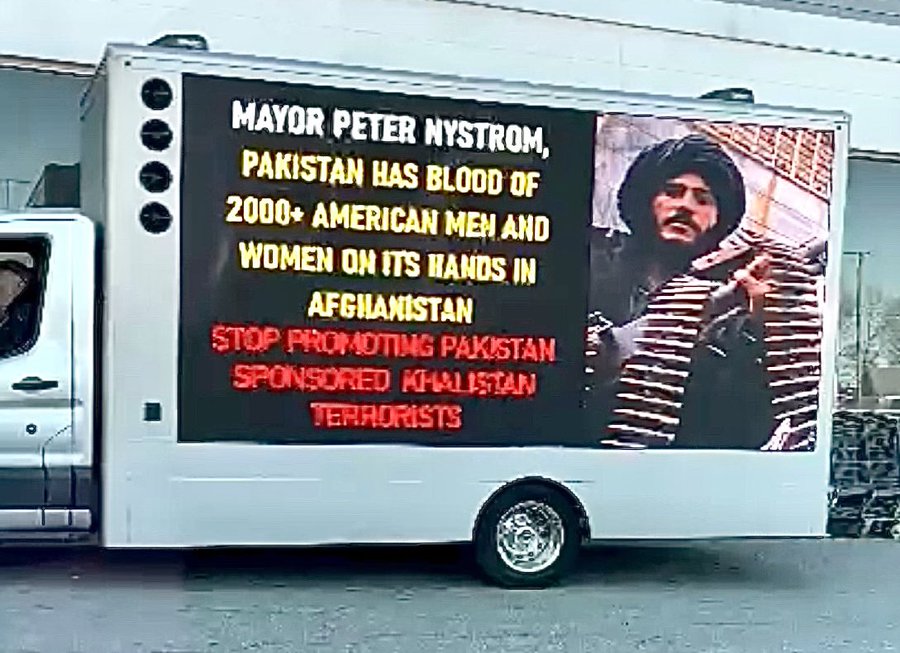 NORWICH, Conn. — The FBI is working with police in Norwich to investigate an incident that a religious community says could lead to hate crimes.

Norwich has a vibrant Sikh community. Sikhs are a religious group from India. Many of them came here to the United States in search of a better life following persecution and genocide in their homeland at the hands of the Indian government in 1984.

“So this is a melting pot. There is no space for hate in our community,” said Swaranjit Singh Khalsa.

So when a truck with digital screens flashing messages of hate showed up driving around town, it came as a shock to the Sikh community.

“I think these kinds of things could lead to serious violence,” remarked Gurpreet Singh.

The truck depicted a man in a turban holding a gun with ammunition.

“The intention was to target Sikhs and people who wear head gear,” explained Khalsa.

Swaranjit Singh Khalsa is the first Sikh city councilor and the founder of the Sikh Art Gallery. He showed FOX61 around. It’s a place to educate the community on Sikh culture and history. Khalsa says this truck was meant to put a wedge in the relationship Sikhs have built. “Which has grown between the community and the elected officials.”

Khalsa is also a supporter of the Khalistani movement, an emancipation movement for Sikhs to have their own homeland. Some Indian ultra-nationalists have tried to liken their message to terrorism sponsored by Pakistan.

Rashid Munier knows this kind of hate messaging all too well. He’s Pakistani and was one of the first Muslim victims of a hate crime in days following 9/11.

“I don’t want anything again to happen to the community because we are living with love and harmony,” remarked Munier.

The messages on the truck went as far as to call out Norwich Mayor Peter Nystrom for his support of the Sikh community. Mayor Nystrom did not respond to FOX61’s request for comment.

The presence of the truck is being investigated not only by Norwich police, but the FBI and DOJ. FOX61’s investigation traced the truck back to a company in Massachusetts called Boost Outdoor Media. FOX61 called them and explained that we were looking for information on who funded the hateful messaging. The person hung up the phone.

Gupreet Singh is a Sikh business owner in Norwich. The truck was parked outside his restaurant part of the day.

“When I saw the Sikh word, then followed by terrorist. Automatically it took me back to 1984.” Singh, the owner of the Royal Punjabi added, “We came here for a better life. And if we still see something happening here too, where should we go?”

The Sikhs in Norwich tell FOX61 they believe whoever funded this truck has ties to Indian ultra-nationalists who have a history of threats and disinformation against Sikhs. That is something that is being investigated.

Investigators tell FOX61 all of this needs to be balanced with the right to free speech. The Sikh community says they support free speech but that a line needs to be drawn when that speech crosses over into disparaging and slandering groups of people.

“The intention was to target Sikhs and people who wear head gear,” said Khalsa. “After 9/11, we all know, terrorists attacked America. But how it was done through the media. They never said that Sikhs are not those people or that the Muslim community is not a bad community.”

Connecticut is the only state in the nation to have a law recognizing November 1st as Sikh Genocide Remembrance Day.