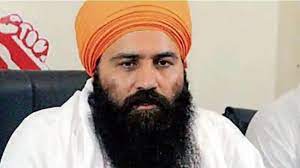 Reject the request from a secessionist group to raise the flag of Khalistan: Baljit Singh Daduwal

In a video message, Daduwal said many Sikh families were suffering because their young sons were getting lured by payment of a few hundred to thousand dollars and promise of a job made by a US-based secessionist organisation in exchange for hosting Khalistan flags or painting its slogans.

“It is tragic that Sikh, mainly Amritdhari youths, have got swayed by these promises and end up in jail. They are not even getting bail. Many youths have been in jail for over two years. Many recently approached me for relief. The organisation that got this unlawful work done didn’t even pay them,” Daduwal said.

“If the foreign organisations are so concerned about unemployment, they should come here and open factories or invest in projects to help Punjab youths,” he said.