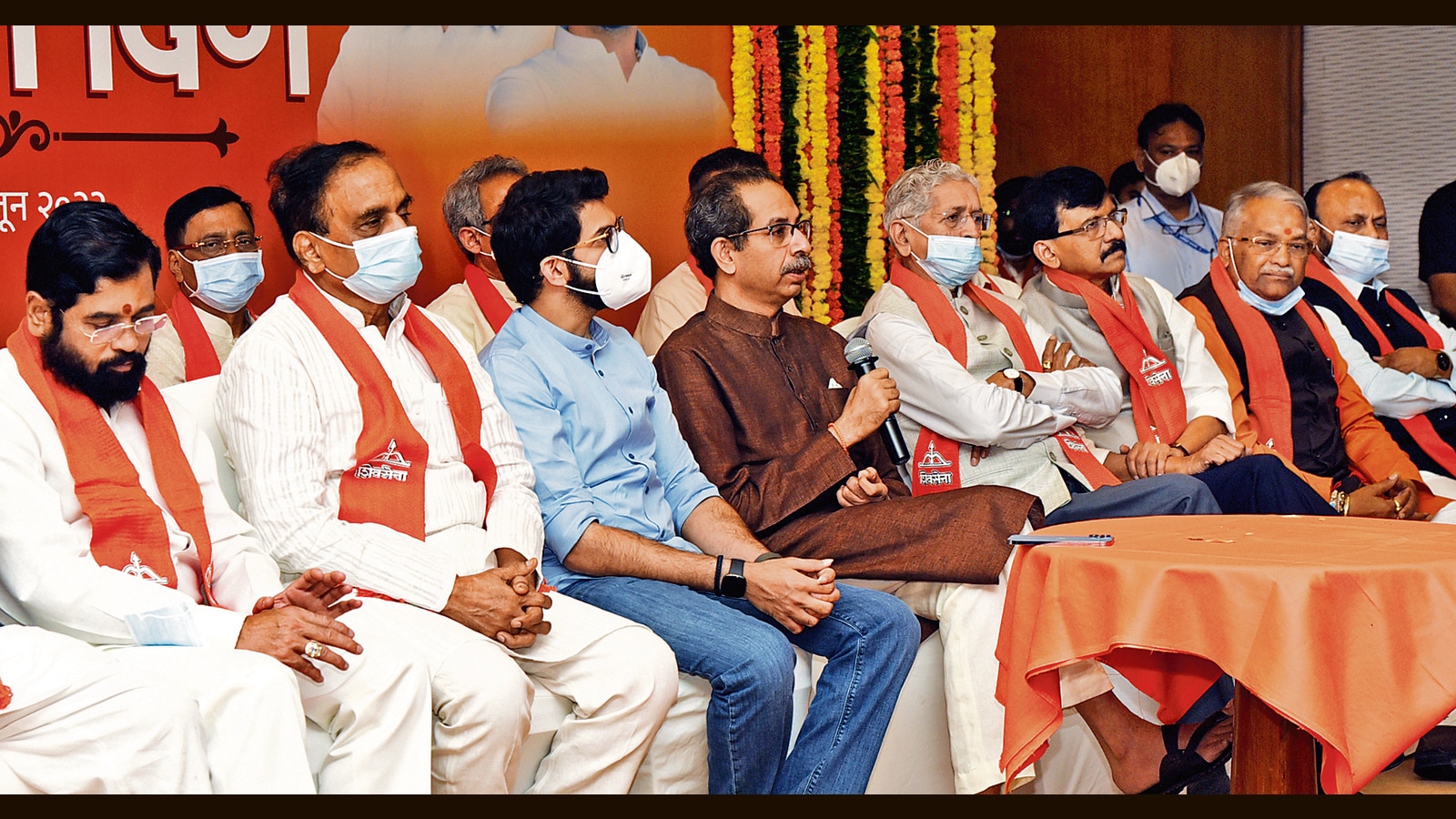 How Shiv Sena works: First an organisation, then a political party

Despite its monolithic and autocratic structure, the Shiv Sena is no stranger to the process of splits and defections that are inevitable in the trajectory of most political formations. However, the rebellion by urban development minister and Thane strongman Eknath Shinde, which has seen most of the Shiv Sena’s legislature wing walk away, poses the most serious existential threat to the party under chief minister Uddhav Thackeray.

There is talk of the new group claiming the legacy of party supremo Bal Thackeray and the credo of militant Hindutva, which the rebels claim has been diluted after Uddhav joined hands with the “secular” Congress and Nationalist Congress Party (NCP) to form a government in Maharashtra in 2019.

The Shiv Sena now faces an uphill task — apart from fighting the seemingly lost battle to ensure that Uddhav retains his chief ministerial chair, it will have to ensure that it retains power in the Mumbai and Thane civic bodies, which are crucial to its politics. The Brihanmumbai Municipal Corporation (BMC), which is the richest civic body in India, has been controlled by the Sena between 1985-1992 and then from 1997 till date. Many of the party’s full-time workers survive on the spoils that trickle down through the power networks in the civic body and this “reward economy” helps keep its party organisation in fine fettle.

However, despite Shinde and his rebels inducing a vertical split in the Shiv Sena’s support base, party loyalists present a cogent argument about there being some light at the end of the tunnel.

The Shiv Sena stands out vis-à-vis other political parties due to its strong organisational and grassroots networks, especially among the working classes, enabling it to dominate the streets of Mumbai. As its members often note, the Sena is first an organisation, and then a political party. This culture of machismo and “direct action” has prompted scholars such as Julia M. Eckert to describe the Shiv Sena as a “party, movement and gang at once”.

Though this machismo has been tempered by the gradual gentrification of the city, the party still retains a strong organisational muscle. Despite the mutiny in its ranks, the common Shiv Sainik has an emotional bond with the late party supremo and his family, and this can be used by the Shiv Sena for its revival.

For instance, Arvind Bhosale, a party worker from Worli, refused to use footwear till Narayan Rane, who fell out with the Sena in 2005, was defeated in the polls. Bhosale could finally wear his chappals in 2014, when Rane lost from Kudal in Sindhudurg. Insiders say that if it wants to rise from the ashes again, the Shiv Sena will have to do away with the saturation that has set in and revive its organisational structure. After all, it is this network that has helped the party overcome previous disruptions.

Few know that the organisational structure of the party, which can outmatch rival parties, can be traced to a former Sangh Parivar hand — Datta Pradhan. The Sena’s initial shakha structure was unwieldy, and a shakha covered a huge geographical expanse. Pradhan, a Jan Sangh man who joined the Shiv Sena in 1969 but left in 1977, remoulded it to cover a municipal ward each, which gave the organisation a strong grassroots presence of 227 shakhas in the city. The shakha forms the basic unit of the Shiv Sena’s organisation and has a network extending to the ordinary Shiv Sainik, the gata pramukh, and the shakha pramukh, who is the head of this branch. A collection of shakhas make up a “vibhag” or division which corresponds with a Lok Sabha constituency in Mumbai city. A vibhag is headed by a vibhag pramukh who has upavibhag pramukhs for individual assembly constituencies to assist him. These division chiefs play a significant role in the Shiv Sena—even aspirants for nominations to assembly seats must get their recommendation.

As the party expanded its footprint outside Mumbai, so did its party structure leading to the creation of three party secretaries and a national executive that comprises these three secretaries, deputy leaders, district chiefs and state unit chiefs, all of whom Uddhav Thackeray has called for a meeting on Saturday as he strives to save the party.

The Shiv Sena was a child of its times — it was born in 1966 as the reflection of the existential anxieties of the Maharashtrians who felt disenfranchised and threatened in the capital of the state of Maharashtra, which had been formed six years ago.

The change in the cultural, social, linguistic and economic landscapes induced by Mumbai transiting from a manufacturing centre to a service hub in the post-modern era has led to a fresh set of anxiety for these masses. Ironically, the elephant in the room is the alleged complicity of the Shiv Sena in the process. It was a mute spectator as the textile mills in the city, whose workers were part of a robust working-class movement were run down and its prime real estate taken over by sharks. The Maharashtrians, who were already the largest minority and not the majority in Mumbai, were forced to migrate beyond its municipal limits. Sena leaders are also reputed to have a stake in the real-estate business, which is responsible for the astronomical costs of living in Mumbai, which hurts the working and middle classes.

More importantly, to ensure its survival, the Shiv Sena will also have to develop an ideology and political program and go beyond demagoguery, emotional issues or knee-jerk reactions to take a forward-looking position on issues like economic policy, gender justice, environmentalism and sustainable development. This can also help the party emerge as a true regional party with a pan-Maharashtrian presence like the political formations in south India.

In 1984, SA Dange, a doyen of Indian communism, who by then had been expelled from the Communist Party of India (CPI) had been invited to address the Shiv Sena cadre. Then, Sena chief Bal Thackeray was briefly enthralled by the concept of “scientific socialism”. In his speech, the polymath noted that the Shiv Sena’s Achilles heel was that the organisation did not have a theory (an ideological position) and that it was impossible for an organization to survive sans one.

Therein lies a deeper problem, and perhaps the solution for the party.