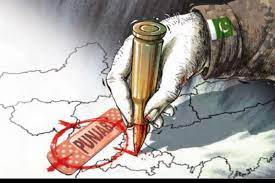 CHANDIGARH:  A pro-Khalistan banner was found outside the mini-secretariat complex in Ropar, Punjab, where offices of deputy commissioner and senior superintendent of police are located.

The banner was put on the tree outside the boundary wall of the complex. The Punjab Police removed it immediately after it was noticed at around 7 am on Wednesday.

A video message released by the banned organisation Sikhs for Justice (SJF) showed the ‘Khalistan flag’ outside the SSP office in Ropar.

Two months earlier, the Sonepat Police had busted a module having links with pro-Khalistani elements.

The police said the arrested three men were accused were involved in a targeted killing in Ropar.