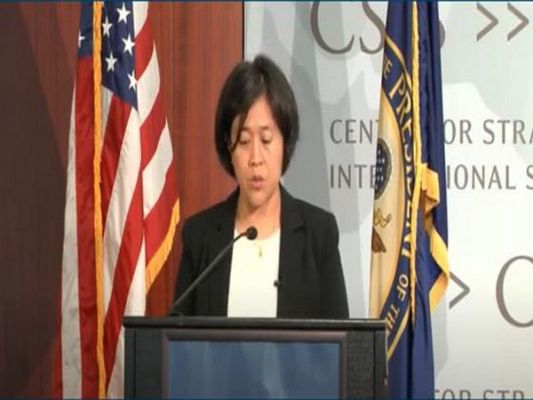 China undercut other countries prosperity with its unfair trade policies

Washington, US: China with its unfair trade norms have been cutting the prosperity of the world countries for a long time now said Ambassador Katherine Tai.

“We must defend – to the hilt – our economic interests… That means taking all steps necessary to protect ourselves against the waves of damage inflicted over the years through unfair competition.”

Speaking at the Center for Strategic and International Studies (CSIS) outlining the Biden-Harris Administration’s new approach to the US-China bilateral trade relationship, Tai said that U.S. plans to launch new trade talks with China, but will maintain tariffs on Chinese imports as it presses Beijing to fulfill pledges to buy more U.S. goods and services.

Tai’s speech will mark the last three months of the deal, which was signed by Trump in 2019. It called for China to expand purchases of certain U.S. goods and services from Jan. 1, 2020, through Dec. 31, 2021. Under the agreement, China was supposed to purchase an additional $200 billion in U.S. goods over a two-year period, but the nation has not lived up to that pledge. Under a Phase 1 deal struck by Donald Trump, China promised to increase its purchases of US agricultural and other goods to rebalance the relationship.

But Ms Tai, who was appointed by President Joe Biden in April, said the Chinese government continued to “pour billions of dollars” into subsidising industries such as agriculture, steel and semi-conductors, making it impossible for the US to compete.

“We continue to have serious concerns with China’s state-centered and non-market trade practices that were not addressed in the Phase One deal. As we work to enforce the terms of Phase One, we will raise these broader policy concerns with Beijing,” Tai said during a speech and even stated examples.

“In 2000, there were more than 100 US steel companies. We produced 100 million metric tons of steel annually, and the industry employed 136,000 people in communities across the country. Sooner after China started building its own steel plants, its production capacity ballooned depriving us steel companies of valuable market opportunities, low price to Chinese steel flooded the global market, driving out businesses in the United States and around the world,” Tai Affirmed.

“Today China produces over 1 billion metric tons annually and accounts for nearly 60 per cent of global steel production. China produces more steel in a single month than the United States and most other countries in the world, produce in an entire year. In the US, employment in the steel industry has dropped 40 per cent since 2000,” added US Trade Representative Tai.

She also gave examples of photovoltaic solar cells. The US was once a global leader but they were forced to close.

“We see the impact of China’s unfair policies in the production of photovoltaic solar cells. The United States was once a global leader in what was then an emerging industry but is trying to build out its own industry. Our companies were forced to close their doors. Today, China represents 80 per cent of global production and large parts of the solar supply chain, don’t even exist in the United States,” said Tai.

Talking about faulty trade policies of China, Tai focussed upon agriculture. She said that while agricultural exports to China have increased but market share is shrinking.

“US agriculture has not been spared either. While we have seen more exports to China in recent years, market share is shrinking and agricultural remains an unpredictable sector for US farmers and ranchers who have come to rely heavily on this market. China’s regulatory authorities continue to deploy measures that limit or threaten the market access for our producers, and their bottom line,” added US ambassador.

“We also see troubling dynamics playing out today with the semiconductor industry in 2014 China issued an industrial plan to announce the goal of establishing a world-leading semiconductor industry by 2030. Reportedly, China has already spent at least USD 150 billion on this effort. With more on the way its intentions are clear, just as they were with steel, and solar. These policies have reinforced a zero-sum dynamic in the world economy where China’s growth and prosperity come at the expense of workers and economic opportunity here in the US and other market based democratic economies. And that is why we need to take a new holistic and pragmatic approach in our relationship with China that can actually further our strategic and economic objectives for the near term and the long term,” added Tai.

She reiterated to realign trade policies towards China to defend the interests of America’s workers, businesses, farmers and producers, and strengthen the middle class.
Tai promised to reopen talks with Beijing in the coming days and to “enforce” the commitments it made.”First, we will discuss with China its performance under the Phase One Agreement. China made commitments intended to benefit certain American industries, including agriculture that we must enforce,” added Tai.

“Second, we will start a targeted tariff exclusion process. We will ensure that the existing enforcement structure optimally serves our economic interests. We will keep open the potential for additional exclusion processes, as warranted,” added Tai.

“Third, we continue to have serious concerns with China’s state-centered and non-market trade practices that were not addressed in the Phase One deal. As we work to enforce the terms of Phase One, we will raise these broader policy concerns with Beijing,” added US ambassador.

Tai further said that the US will use the full range of tools to defend American economic interests from the harmful policies and practices of China.

“And we will use the full range of tools we have and develop new tools as needed to defend American economic interests from harmful policies and practices. Finally and critically, we will continue to work with allies to shape the rules for fair trade in the 21st century, and facilitate a race to the top for market economies and democracies,” she added.

Talking about the Biden Administration approach, she said, “President Biden has been clear: the key to our global competitiveness and creating shared prosperity begins at home. We have to make smart domestic investments to increase our own competitiveness. We must invest in research and development and clean energy technology, strengthen our manufacturing base, and incentivize companies to Buy American up and down the supply chain.”

“Unlike the past, this administration will engage from a position of strength because we are investing in our workers and our infrastructure. Repairing our roads and bridges, modernizing our ports, and delivering expanded broadband are the kinds of investments that will begin to give American workers and American businesses the boost needed to embrace their global competitiveness,” added Tai.