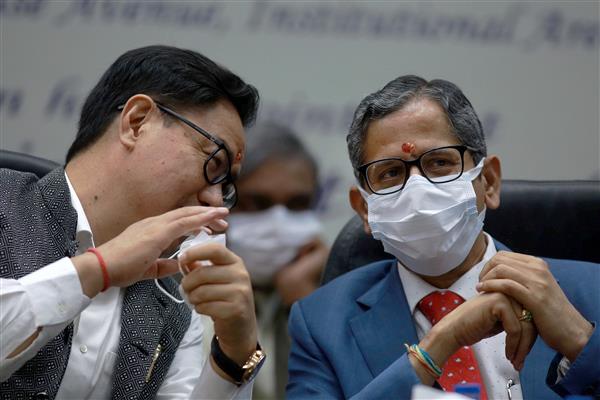 Describing Kiren Rijiju as a dynamic Law Minister, Chief Justice of India NV Ramana on Saturday said he looked like a college student coming from a college.

Recalling how Rijiju met him a day after taking oath as the Law Minister, the CJI said, “I thought he is a college student coming just from a college. I don’t want to ask the secret of his age and all that… So he said sorry sir! I don’t have any experience in law. Even though I am a law graduate I never practised.”

“He said honestly sir you please guide us. You please tell (me) what’s the problem and all. I requested him the first problem is filling up the vacancies… and expedite the vacancies…this is the first priority. Then he immediately started working…he started sending all the files… thanks to him and he cleared at a jet speed. The nine names I think…six days’ time—record break…first time without any murmur… anything,” the CJI said during a function organised by the Bar Council of India to facilitate him.

“I must thank the Honourable Prime Minister and the Law Minister and the Government of India for clearing the names. I expect with the same speed the other high court names also are cleared. In another one months’ time we expect to fill up at least 90 per cent of the vacancies filled in this country,” Justice Ramana said.

The Law Minister said when he met the CJI for the first time, he didn’t know him much and had heard about him only from friends and the media.

“In our first interaction, I had realised that we have a CJI in whom we have full faith and trust…The Government will not only strengthen the independence of the judiciary but also provide support to the same,” Rijiju said in the presence of Supreme Court judges, some lawmakers and a large number of office-bearers of BCI and state bar councils.

Rijiju also raised the issue of pendency of cases in subordinate courts. “When a person from a rural area expects justice, he sells off everything…like land, etc,…If justice gets delayed then it’s a big question mark on all of us…Denying justice beyond three years is a real delay and by that time justice isn’t even needed.