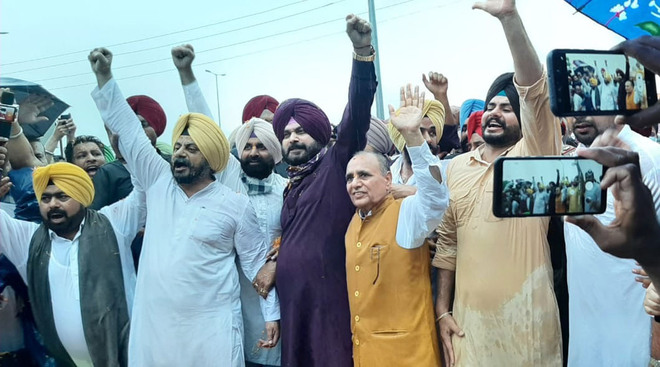 Picking team to be tough task for Navjot Sidhu

Recently appointed Pradesh Congress Committee (PCC) chief Navjot Singh Sidhu faces a tall order of putting together a new team, steering clear of the party leaders whose “stakes” with illegal mining and liquor mafia are no more a secret.

With an apparent free hand from the party high command to choose his team, Sidhu has little time to gather a fine squad reflecting a balance between caste combination and experience to energise the party cadre in the run-up to the 2022 Assembly elections. It has been over one-and-a-half year that the PCC body was dissolved. The AICC will release the list after getting the recommendations from the state unit.

Ex-PCC chief Shamsher Singh Dullo says the very people who were on board with Capt are now the force behind Sidhu, so he must tread cautiously

Many who lost Assembly polls were made district unit presidents, as in case of Mohali and Ropar. Leaders feel it should be discouraged

Navjot Sidhu’s predecessor Sunil Jakhar in his speech at the former’s installation ceremony recently had advised: “Fulfilling the unfinished agenda of making party workers stakeholders in power sharing is the key to mobilising party workers ahead of the elections.”

Former PCC chief Shamsher Singh Dullo said: “Sidhu has to tread cautiously. The very people who were on board with Capt Amarinder Singh are now the force behind Sidhu. At least 70 per cent of the leaders have stakes in liquor, sand mining or bus operations business. Whom will he take along?”

A prominent Dalit leader and Rajya Sabha MP, Dullo said: “Navjot Sidhu has to take along the Dalit, Hindu and OBC leaders along if he is keen to mobilise the party cadre down the line.”

In the past, the party candidates on losing in Assembly elections were made district unit presidents, as in case of Mohali and Ropar. “This should be discouraged. Those who contest polls should not be made DCC presidents. Besides, the dominance of Jats in key positions, as reflective in the Cabinet, was also visible in the previous PCC body,” he said.

A senior party leader from Doaba, Dr Ram Lal Jassi, said Sidhu was a reasonable person. “He should put up a united front with the CM if the 18-point agenda has to be implemented on a war footing.” He pointed out that he had to write to party president Sonia Gandhi when Dalits were ignored in the PCC body in 2016. Meanwhile, it is learnt that Sidhu was keen on getting the DCC presidents announced on priority.