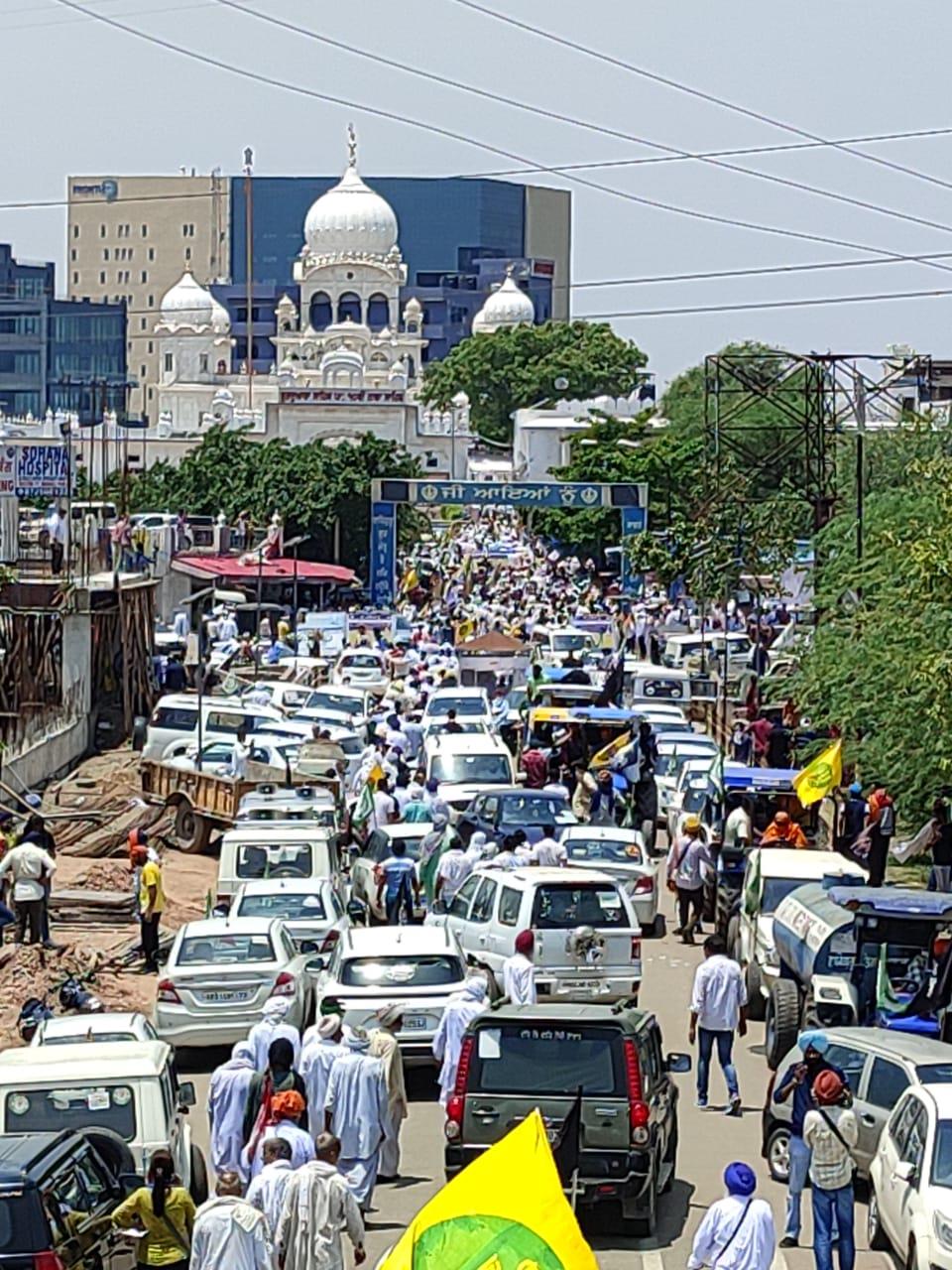 Farmers from Punjab and Haryana took out protest marches and submitted memorandums to officials from the Governor House before returning home on Saturday, even as Union Agriculture Minister Narendra Singh Tomar appealed to them to end their stir and offered to resume talks on the provisions of the three legislations.

Terming Tomar’s recent statements as “perplexing and contradictory”, it asserted that farmer leaders are not seeking some “meaningless amendments” in the central farm laws which have “fundamental flaws” and urged the people “to punish the BJP”.

Security was tightened in Delhiand other cities after the SKM said that representatives of farmers will submit memoranda of their demands, addressed to the President, to governors in various states.

Farmers had planned to march towards the Punjab and Haryana Raj Bhavans here and submit a memorandum to mark the completion of seven months of their agitation against the three Central agri-marketing laws on June 26.

A heavy police force was deployed in and around Chandigarh to stop protesters from heading towards the Punjab and Haryana Raj Bhavans.

Barricades were put up at many places to prevent farmers coming from Mohali and Panchkula to go towards Chandigarh.

However, agitating farmers, coming from the Mohali side, entered Chandigarh after forcing their way through barricades put up at the Chandigarh-Mohali border while facing water cannon.

Farmers coming from the Mohali side were led by farmer leader Balbir Singh Rajewal, while protesters from the Haryana side were led by Haryana BKU (Chaduni) leader Gurnam Singh Chaduni and Samyukt Kisan Morcha member Yogendra Yadav.

Farmers in Panchkula forced their way through a layer of barricades but they were not allowed to enter Chandigarh and stopped at the Chandigarh-Panchkula border where Haryana police had deployed water cannon and trucks.

Earlier, BKU leader Gurnam Singh Charuni had said they would sit peacefully at the entry point if police would not allow them to enter Chandigarh.

The farmers had lined up since Saturday morning in their vehicles alongside Zirakpur roads and Amb Sahib gurdwara in Phase 8 in Mohali awaiting green signal from their leaders to march towards Chandigarh. The police have erected barricades at several places.

Farmers marched from Mohali’s Amb Shahib Gurdwara to Chandigarh via YPS chowk at 1 pm. The protesters were carrying farmers union flags on tractors, cars and walking on foot. The farmers raised slogans against the Centre government. En route to Chandigarh, both from Punjab and Haryana, special ‘langars’ or community kitchens were organised for the protesting farmers by locals.

Heavy traffic jam was witnessed in the city. Many farm activists were seen coming to Chandigarh in buses.

Meanwhile, gangster-turned-activist Lakha Sidhana, who was booked for his alleged involvement in violence that ensued at the Red Fort on Republic Day, could also be seen participating in the farmers’ protest programme.

Earlier, addressing the gathering at Gurdwara Amb Sahib, Rajewal slammed the Modi-led government over the three farm legislation and alleged that the Central government intended to “hand over farming” to corporate houses.

Independent MLA from Haryana Sombir Sangwan, who was present at Gurdwara Nada Sahib, said the farm laws will “destroy” the farming community.

Farmers have been protesting against the Farmers’ Produce Trade and Commerce (Promotion and Facilitation) Act, 2020; Farmers’ (Empowerment and Protection) Agreement on Price Assurance and Farm Services Act, 2020; and the Essential Commodities (Amendment) Act, 2020.

Farmers enter Chandigarh from Mohali side

The morcha had announced to observe June 26 as “Kheti bachao, loktantra bachao” (save farming, save democracy) day on the completion of seven months of the farmers’ protest and the 47th anniversary of Emergency in India.

Traffic jam due to farmers’ protest against BJP center Government at Sector 16-17 and JW Marriott in Chandigarh on Saturday.Tribune Photo: Vicky