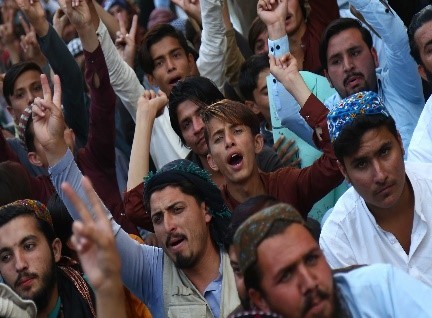 Pakistan’s ride on the Taliban tiger could turn out to be short and fatal.

Pashtun people of Pakistan who mostly live on the border areas of Pakistan and Afghanistan that is the Durand line. Pashtuns used to be the well wishers of Pakistan but with time and Pakistan’s ignorance, they have created their own enemy. Pashtuns now are against Pakistan and are amongst one of the major problems for the Pakistani government.

It is well known that for the Pashtuns, close to 35 millions, living in Pakistan, the Durand Line which divides their `nation`, has always been a sore point. There is an organic link between them and the 15-million Pashtuns living in Afghanistan. Hence, successive Afghan governments have re-emphasised that the border drawn by the British was artificial and unacceptable. In fact, many staunch Afghan leaders have called for a `Greater Afghanistan` or “Pashtunistan` , a demand which still finds resonance in the heart of most Pashtuns.

The Taliban, when it ruled Kabul, too had refused to recognise the Durand Line as an international border between Afghanistan and Pakistan. In this regard, a telling anecdote relating an exchange between Taliban leader Mullah Omar and retired Major General Naseerullah Babar, supposed to be the architect of Pakistan’s Taliban game, is worth recounting. During a meal, Babar suggested to Mullah Omar that if the Taliban were to recognise the Durand Line, all the problems would be solved. The Taliban chief flew into a rage over this question, and forsaking the traditional Pashtun code of honour, asked Babar, a Pashtun himself, to stop eating and leave the place at once. Omar is said to have called Babar a “traitor“.

What a close confidant of Mullah Omar, once the Taliban Ambassador to Pakistan, Mullah Abdus Salam Zaeef, wrote in his memoir, My Life with the Taliban, would suffice to highlight how strong the undercurrent against Durand Line was among the Taliban leadership. He wrote“Pakistan, which plays a key role in Asia, is so famous for treachery that it is said they can get milk from a bull. They have two tongues in one mouth, and two faces on one head so they can speak everybody’s language; they use everybody, deceive everybody. They deceive the Arabs under the guise of Islamic nuclear power, saying that they are defending Islam and Islamic countries. They milk America and Europe in the alliance against terrorism, and they have been deceiving Pakistani and other Muslims around the world in the name of the Kashmiri jihad. But behind the curtain, they have been betraying everyone.”

An immediate fuse that could light up a bigger conflagration over the Durand Line could be the border fence being constructed on the Pakistani side of the Durand Line since 2018. Afghanistan has strongly opposed the construction. There have been frequent armed clashes between the two countries since June 2016 when the first reported clash near Chaman saw casualties on both sides. In May 2017, soldiers from both the countries clashed at Torkham resulting in several deaths. On October 15, 2018, the forces exchanged fire over fencing. In July 2020, clashes were reported from Kunar province where Pakistan was said to have fired missiles into Afghan territory. In July this year, there were reports of Afghan forces pushing back Pakistani soldiers on the outskirts of Kandahar.

With such a history of clashes, animosity, between the two countries, it is highly unlikely that the Taliban, if it manages to seize control of Kabul, will make any territorial concession to Pakistan, especially since the issue is more emotive than political for Pashtuns.

This time around there is another, very telling, difference–the Pashtuns are no longer as blindly loyal to Pakistan as they were in the past. The Pashtuns living in the tribal areas and Khyber Pakhtunkhwa are in fact an enraged community. For the past three years, Pashtuns have been waging a peaceful battle of nerves with the Pakistani state, especially the army. Pashtuns blame the army, and rightly so, for the brutal destruction of their homes and hearth in successive military operations supposedly targeting terrorists hiding along the Durand Line. Millions of Pashtuns had to flee their homes and find shelter with their relatives in distant cities or worse in tent-colonies set up by the government.

When the Pashtuns began raising their voice against this colossal human right violation indulged in by the army, their voices were brutally suppressed. Countless young Pashtuns were abducted, tortured and most often killed by the army and its intelligence agencies. Failing to get any justice from the state, the Pashtuns organised themselves under the Pashtun Tahafuz (Protection) Movement (PTM) which has, in the past two years, organised large scale protest movements across the country, raising slogans against the army, an unheard of event in Pakistan.

Although the PTM has time and again raised its voice against the Taliban and other militant groups, it is not clear how things will turn out if the Taliban were to extend an olive branch in a Pashtun wrapping. This should worry Pakistan the most, for this will have the potential of making their worst nightmare of a Pashtunistan come true.