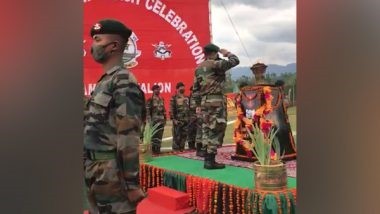 Vilgam, Jammu and Kashmir, India: 50 years to the victory of 1971 war has been celebrated by receiving victory. Tremendous fervour by civilians at the Champora Bridge and a Motor Bike Rally by local youth ushered it along the route could be seen.

As part of the year-long Swarnim Vijay Varsh Celebrations, four Victory Flames were lit by Prime Minister Shri Narendra Modi at National War Memorial on 16 December 2020, which were sent to four cardinal directions.

One of the Victory Flames traveling due North was on Saturday brought to 15 Rashtriya Rifles, Vilgam in Jammu and Kashmir from Headquarter 8 Sector, Charkoot as part of its last lap in CIF (K).

To commemorate the 50th anniversary of Indian Armed Forces Victory in the 1971 Indo-Pak War, the year 2021 is being celebrated as ‘Swarnim Vijay Varsh’.

The victory flame was brought to the Main Gate of 15 Rashtriya Rifles at Vilgam and handed over for mile long Victory Run by National Level Sportspersons towards the celebration area. At the last stretch of the run, the Victory Flame was handed over to the War Veterans and was received by Commander Headquarter 8 Sector.

A wreath laying ceremony with full honours by war veterans and Commander, Headquarter 8 Sector, was performed at the Victory Flame. The ceremony was witnessed by a large number of Ex-servicemen, children and various civil dignitaries of the area.

The celebration consisted of cultural programme including performance of Kashmiri dance by local dance group, patriotic song by school children and a mesmerising battle depiction of ‘Op Gazab’, which was fought at Tangdhar Sector by Indian Troops was also recreated towards the end of the event which totally enthralled the audience. ‘Khukri Dance’ performed by ferocious looking Gorkha Soldiers which took the audience by awe, concluded the ceremony.

War veterans were felicitated by Commander 8 Sector in recognition of their sacrifices and in achieving victory in the 1971 Indo-Pak War.

The victory flame was later escorted for the Night Halt at 15 Rashtriya Rifles Quarter Guard. On 27 June 2021, the ‘Victory Flame’ was bid adieu for 59 Medium Regiment Aegis, 19 Artillery Brigade for further celebrations.