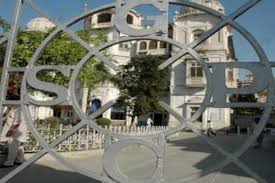 The Pakistan Sikh Gurdwara Parbandhak Committee (PSGPC) on Sunday refused to follow the “amended” Nanakshahi’ calendar that was unveiled by Akal Takht acting jathedar Giani Harpreet Singh in Amritsar a day before and released the original version.
A religious function was organised at Gurdwara Janam Asthan, the birthplace of Sikhism founder Guru Nanak, to celebrate the beginning of the Sikh new year Nanakshahi Samvat 553.
Addressing the gathering, PSGPC general secretary Ameer Singh appealed to the Akal Takht jathedar to resolve the issue and call a group of Sikh scholars to implement the calendar’s original version which he termed as a “symbol of distinct identity of the Sikh religion”.
The SGPC had rolled back the original version introduced in 2003 under pressure from Damdami Taksal chief Harnam Singh Khalsa-led Sant Samaj, which was in alliance with the Shiromani Akali Dal (SAD) during the 2010 SGPC polls.
In the name of amendments, the original version was replaced with the new one which was modified as per the Bikrami calendar, but its nomenclature ‘Nanaksahi Calendar’ was not changed.
“Giani Harpreet Singh during his visit to Pakistan had assured us that he would constitute a committee of scholars to address the issue. If he is facing any problem, we are ready to host a meeting of scholars at Nankana Sahib. The issue has to be resolved at the earliest possible,” said PSGPC chief Satwant Singh said.