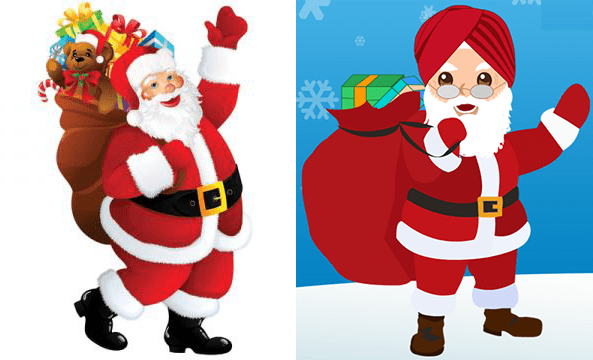 Rajinder Singh became an Internet sensation this year as “Skipping Sikh,” encouraging people to remain vigilant throughout the early days of the coronavirus pandemic.
Today, the 74-year-old has become the “Skipping Sikh Santa,” taking smiles to people’s faces in an otherwise difficult holiday season.
Singh, who lives in Middlesex, UK, already had Santa’s white beard signature. So he put on a red suit, cut a stocking cap and held a turban—a token of his Sikh faith.
As the “Skipping Sikh Santa,” Singh gave gifts to young people who would have had to endure Christmas without a gift under the tree. This is despite the fact that he doesn’t celebrate Christmas in person.
Christmas week is normally a time of mourning for the Sikhs, commemorating the martyrdom of their tenth Guru’s four sons. But Singh’s faith also encourages him to practise selfless service, which is why he wants to bring joy to those who celebrate Christmas.
“I (want to) do anything that I can to make other people happy and help them in any way,” Singh told CNN. “That’s why I can’t give up until my last breath.”
His daughter came up with the idea:
The idea to dress up as Santa came from the daughter of Singh, Minreet Kaur. Kaur watched her dad rise to internet fame after she shared a video of him skipping the rope.
Singh’s fitness workouts have encouraged many others to stay fit during coronavirus lockdowns and have garnered a wide spectrum of social media. He went on to collect £14,000 for the National Health Service of the United Kingdom, an achievement that won him a Queen’s award.
Recognizing that the pandemic made this Christmas season a tough time for many people, Kaur said she suggested to her father that he dress up as a Santa to do more good.
“The idea was, ‘Let’s come back in December as a Skipping Sikh Santa and just spread some cheer and joy and send smiles and positive vibes to end the year,'” Kaur said.
Singh had been on board. If he could make any kids happy, it’d all be worth it, he said.