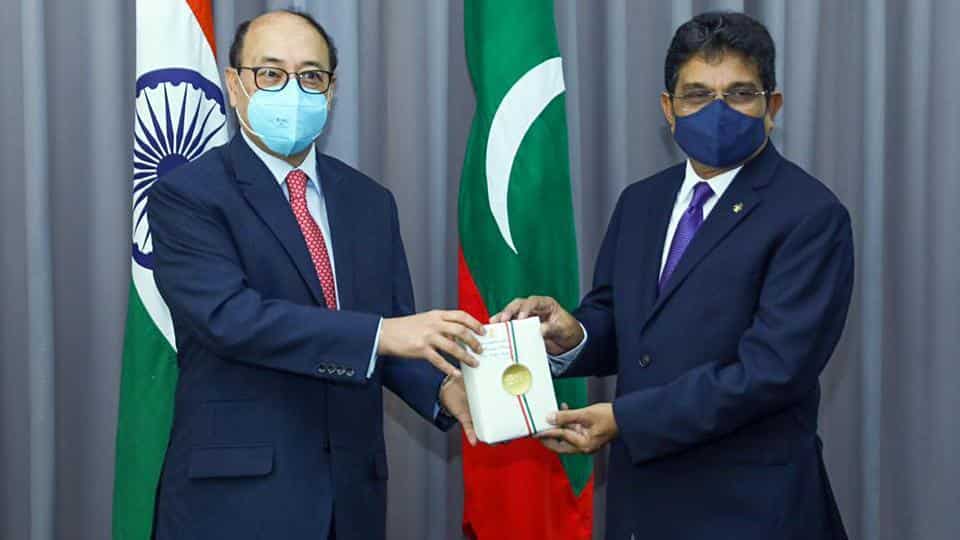 India and the Maldives on Monday signed four agreements, including one for a $100-million grant for a connectivity project, as visiting foreign secretary Harsh Shringla and the Maldivian leadership discussed ways to boost economic recovery amid the Covid-19 pandemic.

Shringla is on a two-day visit to the Indian Ocean archipelago as part of New Delhi’s outreach to key countries in the neighbourhood and beyond. The Maldives is the sixth country he has visited in the aftermath of pandemic-related travel restrictions, the others being Bangladesh, Myanmar, France, Germany and the UK.

One of four memorandums of understanding (MoUs) signed by the two sides was for the grant of $100 million by India for the $500-million Greater Male Connectivity Project (GMCP) that will link capital Male with three islands. India will also provide a $400-million line of credit for the project, the largest such infrastructure venture undertaken in the Maldives.

The GMCP, “an economic lifeline connecting Male with Villingili, the new commercial port at Gulhifalhu and industrial zone at Thilafushi” will “conform to the hallmarks of Indian development cooperation – transparency, full participation and ownership of the host country, and competitive pricing”, Shringla said while speaking at the foreign ministry in Male.

“We deeply appreciate the government of President [Ibrahim] Solih for its ‘India First’ foreign policy. This is reciprocated in full measure by our ‘Neighbourhood First’ policy in which the Maldives enjoys a very special and central place,” he said.

Talks between Shringla and his Maldivian counterpart Abdul Ghafoor Mohamed focused on economic recovery. They emphasised “resilience efforts to curb the onset of the Covid-19 pandemic, including boosting tourism, accelerating the implementation of the ongoing development cooperation projects across the Maldives, and the means of elevating connectivity and bilateral trade”, according to a statement from the Maldives’ foreign ministry.

Also Read: On Kartarpur anniversary, Pak says India yet to reopen its side of corridor

India has unveiled a slew of measures to boost economic recovery in the Maldives, where the tourism industry has been hit hard by the pandemic. In September, India provided a soft loan of $250 million as budgetary support. The two sides also launched a cargo ferry service to cut transportation costs.

Shringla began his visit with a meeting with President Solih, seen as one of India’s strongest allies in the neighbourhood.

The two sides discussed ways to enhance regional trade and connectivity, economic cooperation, tourism and overcoming the pandemic. Solih thanked the Indian government for agreeing to implement an air bubble between the two sides and noted that increasing numbers of Indian tourists had visited the Maldives since it reopened its borders.

Also Read: India, Nepal ties get back on track. Foreign Secy heads to Kathmandu on Nov 26

Solih thanked India for backing development projects through a line of credit agreements, including the GMCP, Gulhifalhu port project, water and sewerage projects on 34 islands and a cancer hospital.

Shringla also met Speaker Mohamed Nasheed and defence minister Mariya Didi, whom he assured of India’s “continued assistance to safeguard our shared interests in the Indian Ocean”, according to a tweet from the Indian high commission.