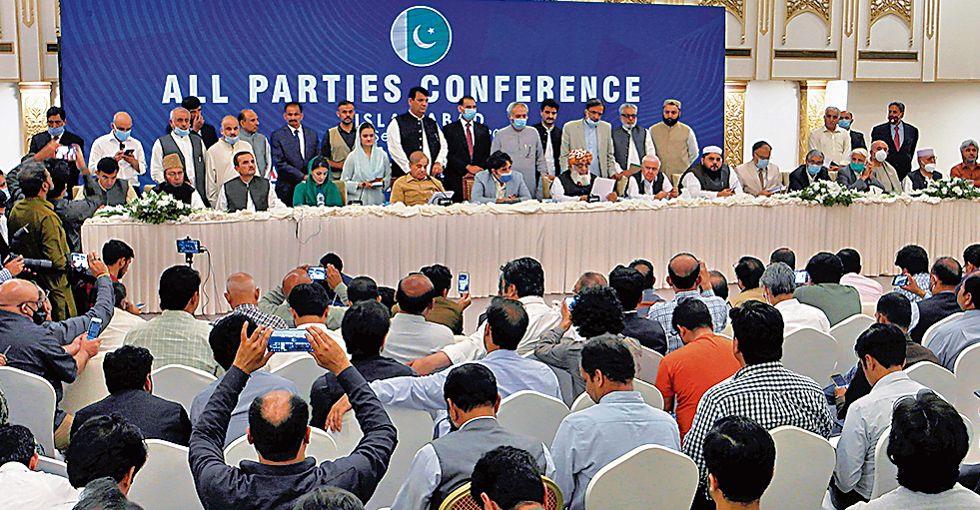 The political temperature in Pakistan has gone up several notches with the coming together of 11 disparate Opposition parties in an all parties conference (APC) on September 20. The meeting was notable for Nawaz Sharif’s aggressive speech from London, as also the formation of the Pakistan Democratic Movement (PDM) with an agenda to unseat the ‘selected’ government of Imran Khan. Nawaz Sharif has posed the question and set the narrative that will dominate Pakistan politics in the immediate future: should the elected representatives rule the country or the establishment.

The Opposition had been struggling for the last two years to forge a strategy against the Pakistan Tehreek-i-Insaf government of Imran Khan. The example of Jamait-i-Ulema-i-Islam chief Maulana Fazlur Rehman being left alone when he staged a dharna in Islamabad in 2019 was one example of divisions within it. A major factor that brought the Opposition together was Imran’s intolerance towards them, in fact, towards any form of dissent as well as his arrogance. As a result, a large number of Opposition leaders have been in and out of jails or have faced trials in one-sided accountability cases. Another critical factor was that the Opposition would lose its majority in the Senate in March, foreclosing any chance of checking the government in parliament and further narrowing the space for it to operate.

In his speech to the APC, Nawaz stated boldly that there was ‘a state above the state in the country’, and that the Opposition’s struggle was against a ‘parallel state’ that had imposed an incapable person on the country through a rigged election process. The APC demanded Imran’s immediate resignation, failing which the PDM would launch a three-phased programme of protests and rallies, culminating in a long march to Islamabad in January 2021. The first protest is slated for October 11 in Quetta. Unlike the past two years, where the individual Opposition parties attacked the government, now the Opposition’s struggle would be directly against the establishment in which the protests against Imran would be a façade.

Nawaz had been silent for the past two years during which the Pakistan Muslim League-Nawaz (PMLN) had veered towards the accommodating politics of Shahbaz Sharif, which did not achieve anything in terms of let-up in the persecution of the party. Nawaz’s hard-line articulation signalled the end to the policies of accommodation. Henceforth, his daughter Maryam would call the shots in the party in Pakistan and he himself will set the agenda from London. The APC’s 26-point resolution that called for ‘end of establishment’s interference in politics’ vindicated his position.

The Opposition has passed the first test — of coming together. The real test of staying together and choosing a leader of the PDM comes next, especially since most of the parties have a history of bad blood and mutual rivalries and have, in the past, fallen prey to the establishment’s machinations. The other big test would be to translate the APC rhetoric and action plan into an effective movement within and outside parliament. Maulana Fazlur Rehman and his madrasa-based students and religious cadres will play a crucial role in such mobilisation. Failure to establish and sustain a strong physical presence on the streets would make the speeches and action plan meaningless.

Imran’s government stands on a weak wicket largely because of his failure on practically every front, including providing good governance. The economy, which was already on a slippery slope, has been battered by the impact of Covid-19. Growth has slipped into the negative territory. Thus, even though it has underplayed Opposition unity, a lot of the government’s attention henceforth would get diverted to their protests, further adversely impacting governance.

Government statements both before and after the APC, calling it anti-Pakistan, betrayed a sense of panic. Imran held that speeches against the government and state institutions were an attempt to appease the Indian lobby and that the Opposition wanted to create a rift between the government and the armed forces.

Since the government was unable to contain the fallout of the APC, the army jumped into the fray with a series of media leaks and statements in order to create rifts in the political alliance. These included disclosures made by DG ISPR on a private TV channel about two meetings held by PMLN leader Mohd Zubair with the army chief, thus trying to discredit the party. However, leaks about the meetings, instead of diluting the impact of Nawaz’s speech or of the APC, only strengthened their validity.

The combined government/establishment strategy would be to create obstacles to ensure the Opposition is unable to conduct successful and well-attended rallies. Measures would include arrest of key Opposition leaders, denying permission for rallies and venues, engineering splits in parties and between parties, etc. However, they would have to contend with the combined political and cadre strength of a three-time PM with a strong base in Punjab and the street power of the Maulana in the other provinces.

The die has been cast and the stakes for Pakistan are high. In this, Imran finds himself on the wrong side of the equation.