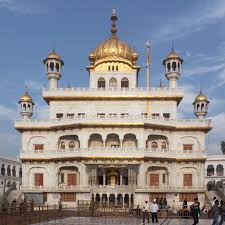 By The Sikh Daily Team on October 20, 2020
18
SHARES
ShareTweet
With no room for the ‘same-sex’ marriage ceremony in the Sikh tradition, the Akal Takht took a clear view of the homosexual knot achieved under the patronage of Sri Guru Granth Sahib ‘saroop’ in the USA.
Akal Takht, officiating Jathedar Giani Harpreet Singh, has given strong directions to the US couple—Sarbjeet Singh Neel and his wife Leela—who are said to have received this ‘unholy’ ceremony in Sacramento recently in the presence of a ‘saroop’ in their possession.
Giani Harpeet Singh ordered the North American Sikh Gurdwara leadership to take the ‘saroop’ out of their possession immediately and put it in the gurdwara.
Confirming the development, Harpreet Singh’s personal assistant said that a strongly worded letter was sent to the ‘erring’ US couple because the Sikh code of conduct did not allow such marriages.

“They were told to hand over the saroop to the designated Sikh activists. It was a blasphemous act of accomplished marriage of two males performed in the presence of this ‘saroop’. It was also a violation of the Akal Takht’s directions,” he said.

He added that numerous complaints were earlier received at the Akal Takht Secretariat about the same couple who often indulged in acts of sacrilege. “The US gurdwara management has also been directed to make them accountable for the explanation which would be sent directly to the Akal Takht for further course of action,” he said.

Sources said that the same couple is considered to have violated the Akal Takht edicts on a number of earlier occasions. He performed a variety of destination weddings by taking ‘saroop’ in flights, taking care of two hoots to the ‘Maryada.’

In January 2005, the then Jathedar of Akal Takht Joginder Singh Vedanti released a ‘hukumnama’ (edit) denouncing same-sex marriages and urging the world-wide Sikh community not to allow such marriages to take place in any Gurdwara. Same-sex unions have been criticized as anti-Sikh, with the idea of same-sex marriages coming “from twisted minds” and being “anti-human.”
Earlier, in January 2016, SGPC was also on a fix when Ontario Premier Kathleeen Wynne, who was openly gay and had announced her support for same-sex marriages, visited the Golden Temple. Her visit was full of controversy, but the SGPC claimed to refrain from honoring her with the traditional ‘siropa’ (the robe of honor).