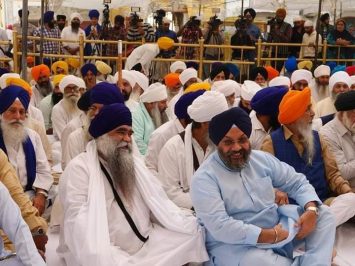 Sikhs need their own Law, If want their religion to spread: GIANI HARPREET SINGH

Once again advocating political independence for Sikhs, Giani Harpreet Singh, SGPC-appointed acting Jathedar of Akal Takht Sahib, has stated that the Sikhs need their own rule if they want their religion to spread on a large scale.

While addressing a function organized at Longowal to mark the death anniversary of controversial Akali leader Harchand Singh Longowal, he said, “Je aseen apne dharam da faillao karna hai, je aseen chahunde han ke dunia vich Khalse de bol bale hon, ta sadda raaj hona barha jroori hai”. (If we are to spread our religion and seek dominance of the order of Khalsa in the world, we must have our own rule or state).

We often read this line: “A religion cannot progress without a sovereign state and without religion everything is waste,” he said, adding, “Raaj bina dharam chalda ta haiga, but dorhda nahi hai” (No matter a religion walks without a state, but does not run).

The jathedar further explained, “When a state gets involved in spreading religion, it progresses with fast speed. The state has played and can play an important role in spreading the respective religion. And Sri Guru Hargobind Sahib gave us the concept Miri-Piri under which religion and politics go along with the former dominates over the latter. He did not only preach religious ethos but also connect the Sikhs with Takht to strengthen us politically during Mughal rule.”

“Despite having very small autonomous territory during Mughal rule, the Sikhs under the leadership of Nawab Kapur Sahib amassed huge strength politically and arms and ammunition thereby being able to give a tough fight to the Mughal rulers. Thanks to the strength gained during this period, the Sikhs got able to establish such a big empire under the leadership of Maharaja Ranjit Singh,” said Giani Harpreet Singh.

He further said, “Today we have got weak religiously and economically. We should not be weak religiously and politically. Weakness in both fields is the reason behind our weakness in the economic field. As we are not strong politically, we are deprived of our resources. To make the Sikhs strong politically, there is a dire need for the contribution of the youth of the community. The youths are the backbone of any community. So, they should play a vital role in the progress of their community.”

The jathedar, prior to this, made a statement in favour of Khalistan, the idea of a sovereign Sikh state, while replying to a query of journalists on the anniversary of the army attack on Akal Takht Sahib and Sri Harmandar Sahib on June 6 this year. He said, “Every Sikh in the world wants Khalistan. If the government offers them so, the Sikh will accept it.”  The nationalists of India made a hue and cry over this statement of the Jathedar.

Notably, a section of Sikhs is criticizing Giani Harpreet Singh for attending the function of the person whose role remained under doubts and who was assassinated by the armed Sikh fighters for inking a pact with the then Indian Prime Minister Rajiv Gandhi compromising with the interests of Punjab and Sikh struggle. This pact is well known as the “Rajiv-Longowal Accord” that was never implemented by the Indian government.