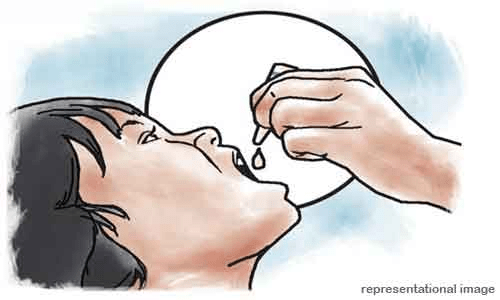 By The Sikh Daily Team on September 26, 2020
Around 7 lakh children in high-risk areas across the state will be immunized by the State Health Department during a three-day polio vaccination campaign. Punjab Health and Family Welfare Minister Balbir Singh Sidhu announced today at the start of a three-day sub-national immunization day by oral polio vaccine drops to children below the age of five in the nearby Jujhar Nagar village.
The state-level program was coordinated by the Department of Health and Family Welfare, Punjab.
Addressing the meeting, Balbir Singh Sidhu said that the drive would cover only high-risk areas, migratory population, brick kilns, construction sites and urban slum areas. Health workers were directed to ensure compliance with all required instructions, such as covering their faces with a mask and washing their hands regularly throughout driving.
Sharing the details about various teams engaged in the drive, Sidhu said, “the target is to administer polio drops to around 6,80,800 children across the state, for which 8,436 places have been identified. A total of 5,530 door-to-door teams have been pressed into service while there are 656 mobile teams. The total number of vaccinators, ANMs and ASHA workers is 14,749, 3,097 and 11,965, respectively, whereas 1,031 supervisors will carry out sudden checks to monitor the immunization program and ensure that all children are immunized.”
The Health Minister appealed to people to get their children vaccinated to save them from various diseases. He said the country was already free from polio. Vaccination must, however, support the eradication of polio from the country. He applauded the efforts of thousands of volunteers, frontline staff and health officials to push these extraordinary times.