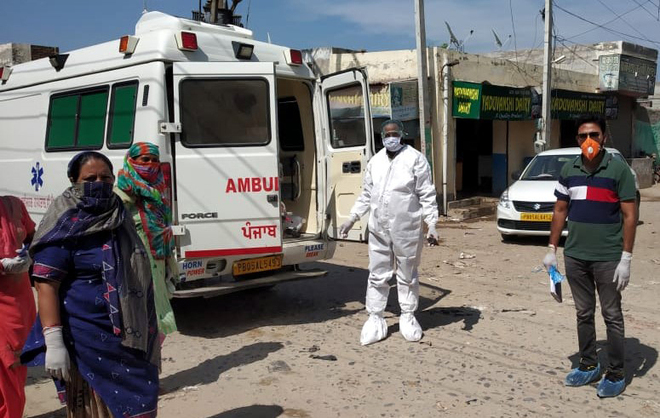 A high number of Covid-19 cases were reported from Ludhiana, Patiala and Mohali as the total cases in the state reached 21,930, with the highest single-day spike of 1,063 cases. Ludhiana reported the maximum number of 10 deaths, followed by Amritsar and Jalandhar (3 each). As many as 23 persons in the state died of Covid today.

In Amritsar, the health authorities reported two deaths and 59 new cases on Friday. The death toll in the district has reached 90, second only to Ludhiana. A 25-year-old resident of Judge Nagar became the youngest victim in the district. Admitted to Guru Nanak Dev Hospital (GNDH), he was suffering from acute respiratory infection.

Another deceased was Charan Kaur, 80, of Kallu Wala Khuh in the Verka area. Dinesh Bassi, chairman of the Amritsar Improvement Trust, was among those who tested positive.

Patiala once again reported an alarmingly high number of cases, taking the total positive cases to 2,435. Of the cases reported today, 32 are contacts of already tested positive patients and 83 had flu-like symptoms. Civil Surgeon Dr Harish Malhotra said they had declared three containment zones in Rajpura and Patiala city, two in Samana and one each in Nabha and Patran. A resident of Sunam, admitted to Rajindra Hospital here, died late in the evening.

A DSP, an Inspector of the CIA staff and Congress leader Jasleen Sethi are among the 104 new patients in Jalandhar. The district tally has risen to 2,907. With two more deaths, the toll has reached 75. A steno of Civil Surgeon also tested positive. As many as 21 tested positive in Kapurthala.