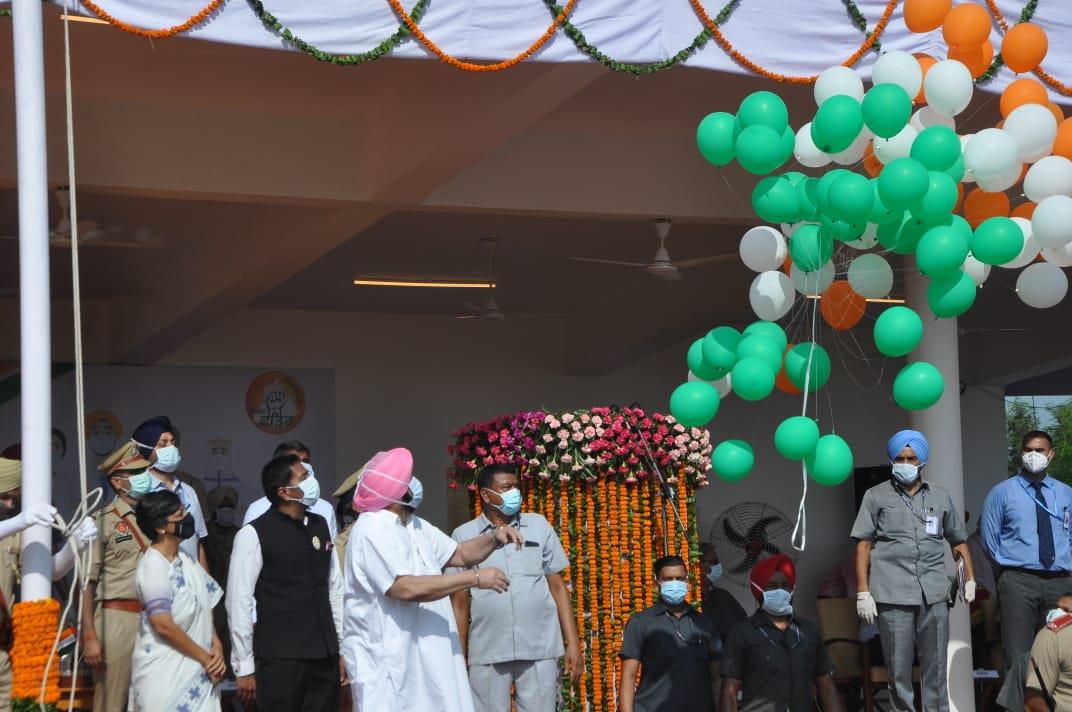 Will not rest till Punjab’s economy is back on track: Amarinder

Vowing not to rest till he had put the state’s economy back on the track of growth, Chief Minister Captain Amarinder Singh on Saturday announced a slew of welfare measures for the people, including facilitation of another six lakh jobs for youth over the next two years, of which one lakh will be in the government sector, a press release by the state government said.

He pointed out that his government had already helped 13.60 lakh youth get gainful employment/self-employment under its flagship ‘Ghar Ghar Rozgar’ scheme.

While reiterating his government’s commitment to incentives for the industry to attract more investment to the state, he said Rs 63,000 crore investment had already been realised on the ground with the potential of two lakh jobs in the state.

Over the next few months, the government would also give debt relief to the tune of Rs 520 crore to landless farmers and workers, said the Chief Minister, pointing out that Rs 4,700 crore had already been disbursed to 5.62 lakh farmers under the debt waiver scheme of the government.

He also announced that his government will soon enact a new land leasing law, to secure land ownership of the farmers and the rights of tenants on agriculture land.

Captain Amarinder further said that with the launch soon of the Smart Ration Card scheme, as many as 1.41 crore beneficiaries would become eligible to get rations from fair price shops.

To further boost the infrastructure of the state, the Chief Minister announced the construction of 1,300-km of state and national highways with an investment of over Rs 12,000 crore in the next two years.

While 28,830 km of rural links roads had already been repaired over the last three years, the next two years will see the repair of another 6,162 km of link roads with an investment of Rs 834 crore, he said, adding that patchwork of an additional 17,000 km of link roads will also be undertaken at a cost of Rs 82 crores.

Underlining the need to take Punjab back to its lost glory in sports, the Chief Minister announced the construction of 750 rural sports stadiums across the state in the next two years.

He also announced Rs 2,500 crore investment, over the next two years, in Phase II of the Smart Village Campaign (SVC), for which Phase I covering 19,132 rural works has already been completed at a cost of Rs 835 crores.

“All rural households of the state will have piped potable drinking water connections in the next two years,” he added.

Another Rs 1,046 crore will be spent under the Urban Environment Improvement Programme (UIEP) in the next two years while efforts will be made to make the Sarbat Sehat Bima Yojna universal, with coverage of all rural and urban households in the state for health insurance of Rs 5 lakh each, Captain Amarinder said.

“Though work on the Mata Tripata Mahila Yojana and the Mata Kasturba Manila Yojna, aimed at social and economic empowerment of women, had been delayed due to COVID-19, the schemes will soon be back on track,” said the Chief Minister, adding that his government would also soon finalise a scheme for economic empowerment for persons with disabilities.

Despite the economic slowdown resulting from the pandemic, which led to 50 per cent decline in revenue collection in the first quarter of the current year, the state government had successfully initiated several steps to combat the crisis, said the Chief Minister.

Citing the importance of online education, Captain Amarinder said 1.74 lakh Class XII students of government schools were being given smartphones this year to facilitate their education.

In addition to tax relief and concessions for the industry, several waivers and deferments of fees, taxes and loans payable by the individuals had also been announced, he said. Timely pensions and cash assistance had also been ensured for the poor and needy, said the Chief Minister.

Expressing the confidence that Punjab would successfully overcome the COVID-19 pandemic, Captain Amarinder appealed to the people to continue to extend their wholehearted cooperation to his government to fight the crisis.

He urged them to take special care of the elderly, while ensuring strict adherence to wearing of masks and other protocols, including avoidance of large gatherings and frequent washing of hands. Get yourselves tested the moment you see any symptoms, he appealed to the people, adding that early testing was the first step towards defeating the disease and winning the war.

Highlights of the Chief Minister’s announcements