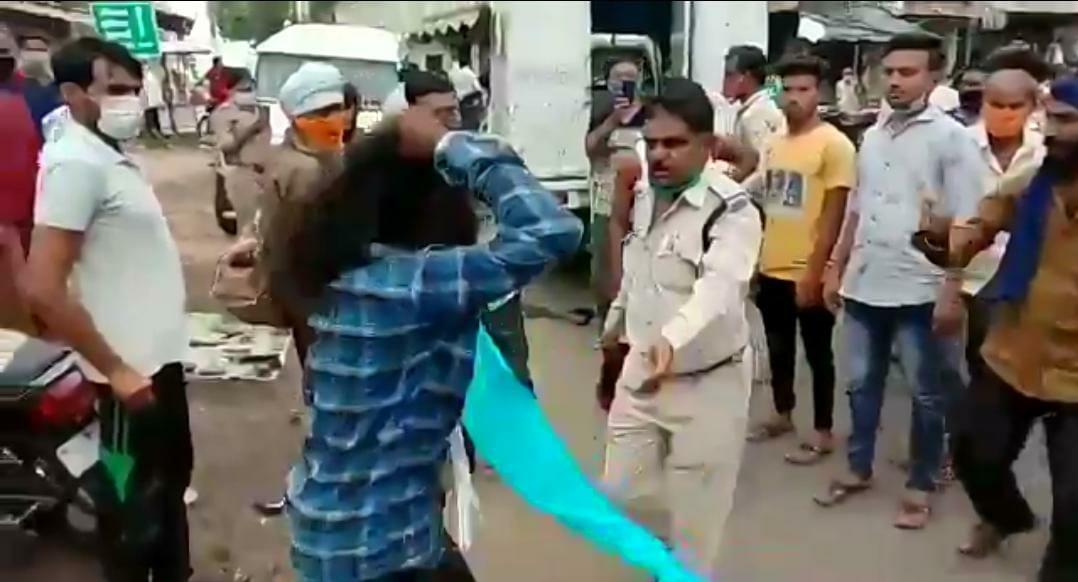 The ‘shocking’ incident of two Sikhs being assaulted by policemen in Madhya Pradesh has been widely flayed by the community.

The incident took place in Rajpur tehsil of Barwani district over an alleged argument between the family of Giani Prem Singh Granthi – who was among those assaulted – and the police over setting up a stall in the area.

A viral video of the incident shows Prem Singh being dragged by policemen in full public view and a policeman pulling him by his hair. It also shows another policeman push a turbaned man, who comes to save Singh.

The turbaned man can be seen requesting the police with folded hands to not beat up Prem Singh.

“Too shocking for words! The barbaric & humiliating attack on Giani Prem Singh Granthi & other Sikhs in Madhya Pradesh is utterly inhuman & unacceptable. I urge CM @ChouhanShivraj to set an example of punitive action against those who treat the sword of the nation with such contempt,” Badal tweeted.

Too shocking for words! The barbaric & humiliating attack on Giani Prem Singh Granthi & other Sikhs in MadhyaPradesh is utterly inhuman & unacceptable.I urge CM @ChouhanShivraj to set an example of punitive action against those who treat the sword of the nation with such contempt pic.twitter.com/oNzkgmdh2I — Sukhbir Singh Badal (@officeofssbadal) August 7, 2020

“Beastly attack on Giani Prem Singh Granthi & other Sikhs in MP is an outrage against humanity. Utterly reprehensible & unacceptable! #Sikhs all over the world are deeply shocked. I urge CM @ChouhanShivraj to take imm & examplary action against all those guilty of this brutality,” Union minister Harsimrat Kaur Badal tweeted.

“The granthi has long been running a lock-keys shop near the Pulsood police outpost. He was beaten, his turban desecrated and then he was pulled through hair on the road in full public view by cops. This amounts to insulting religious sentiments of the Sikh community,” Saluja tweeted.

Madhya Pradesh Congress chief Kamal Nath tweeted, “This atrocity and anti-social act is disrespect to the holy Sikh religion. Such incidents cannot be tolerated. I demand from the government to immediately take strong action against those responsible for it and justice for the victims.”

Chouhan said in a tweet that assistant sub-inspector Sitaram Yadav and head constable Mohan Jamre have been suspended with immediate effect.

Chouhan said, “Such barbarism and erratic behaviour won’t be tolerated at any cost. The guilty will be punished for the misdeeds.” Chouhan has also ordered a probe into the matter.

Prem Singh said he runs a small shop close to the police ‘chowki’ and deals in old locks and keys. But police claimed Prem Singh was inebriated and created ruckus when he was asked to show his driving licence during a checking drive. With agencies