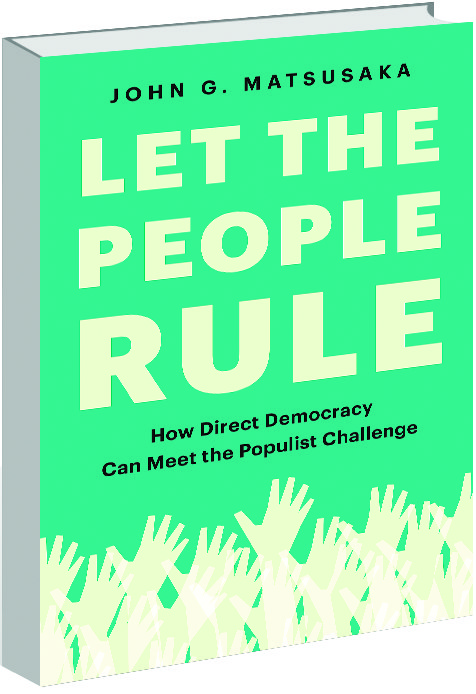 By Desk Team on August 1, 2020
Advertisement

In a democracy the poor will have more power than the rich because there are more of them. The will of the majority is supreme. — Aristotle

Modern democracy began to evolve with the universal suffrage movements of the late 19th century that guaranteed all citizens the right to vote. This system of governance remains much to be desired, especially owing to the considerable abuse of power in the hands of majoritarian establishments. “Everyone gets to vote today, but we don’t have much control over what the government does,” says John Matsusaka in his recent book. “Congress makes a law and hands over the reins.” The power to make policy has gradually been handed to the judiciary, the corporate lackeys of the government or the few who are in a position to ruthlessly exercise their muscle control on the people and the policies governing them.

The author feels power essentially must be delegated back

We may end up questioning the very doctrine of democracy on the grounds that all that democracy cannot be justified simply because the people decide to do so. On the other hand, it becomes a problem when the representative form of government goes out of hand, or ends up becoming dictatorial, throwing to the wind the will of the people. This is indeed, a conundrum.

India, for instance, is riddled with an overabundance of systemic issues that make the functioning of a free and fair democracy a dream bordering on delusion. The US too, in spite of the assurance of right to life, liberty and equal protection, suffers from the overwhelming malaise of race, religion, gender and sexual orientation which contaminates the true representative nature of a robust democracy. In fact, one is aghast at the angry, bigoted and the narrowly focused section of society that persistently dreams of returning to its right-wing agenda of the sectarianism of Hindutva, Islamic or Christian roots, a cultural polity where dominance of one religion or one colour is the mainstay of the ruling elite.

John Matsusaka’s solution draws attention to power that essentially must be delegated back to the people who, in spite of going through the periodic drill of general elections, end up disempowered to ever take any initiative in the making of major policy decisions. To ensure the rule of the people, Matsusaka maintains, referendum is the only solution, “the best-known form of direct democracy.” “Referendums are a way for the voters themselves to indicate their position on a proposed law.”

On examining the procedures of governance at the local or state levels in the US, voting on charter amendments are common, with citizens allowed to initiate changes by petition or approve new laws. Direct democracy of this nature is in operation in the US, but only at the state level. The US is noticeably lagging behind most of the countries as regards participatory democracy goes. This is notwithstanding the 2017 Pew Research Center survey underscoring the fact that two-thirds of Americans are in favour of “voting directly on major national issues to decide what becomes law.” Other surveys too show that, at the state level, the majority are of the view that the people must propose and ratify decisions on public issues.

This seems to be the case across many democracies in the world. Over decades, people and nations have become complacent about the rule of democracy. Populist trends have submerged any check on the working of democracy with principles of democracy gradually becoming subservient to the ruling party and its blind followers.

The United States is one of only four established democracies that have never held a national vote on an issue. On the other hand, 44 European nations make use of referendums and 18 permit citizens to recommend new laws. All important national issues are decided through referendum in Switzerland. Taiwan too has followed suit, particularly in the recent national election which saw citizen-initiated proposals being put to the nation. Uruguay falls back on the people to revise its constitution every few years. In 1981, Italy, a Catholic nation, took its decision on the abortion issue through referendum. Unfortunately, the abortion issue remains touchy and unsettled in the US. “With a referendum system,” Matsusaka says, “we might find ourselves less polarised than we look. Politicians take extreme paths; people can reach compromise.” Apparently, politics can then become less contentious.

That something is wrong with democracy is obvious in the knee-jerk or ad-hoc decisions of the government. People are kept in the dark whereas constituencies favourable to the policy of the government are given contracts to adjudicate on the important course of action in a crisis. The recent example in India is the contract with Boston Consulting Group for handling the pandemic calamity in India. Partisanship routinely overrides the public interest with polarization indiscreetly making public discourse toxic.

However, playing the devil’s advocate, one could argue that the ruling class cannot always be held solely responsible in a retrogressive state. The people are as much to be blamed, especially if we begin to question their knowledge about politics; very few of the voters can comment on the major economic or foreign policies of the government. Many remain inherently biased with no justification of their political leanings or their beliefs. Lacking strong views on all political matters they often come into clash with rationally thinking public on matters of ideology and governance. However, Matsusaka is hopeful and feels that “Democracy is drifting away from popular control, but we have the tools to bring it back.”