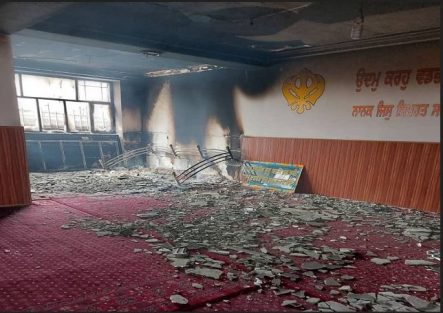 India’s role behind the a terrorist attack on a Sikh Gurdwara in Kabul on March 25 has been exposed as the attacker found to be speaking in Hindi in a heavy Malyalee accent, who later appeared on an ISIS or Daesh video, was identified as Abu Khalid al-Hindi.

The Indian attacker  “planted explosives in the Sikh prayer area before opening fire, killing 50 Sikhs, Hindu and Afghan security personnel.” It was the first time an Indian national was openly identified in a terrorist attack on a minority in Afghanistan. According to reports in the media, Khalid-Al-Hindi was actually Muhammad Muhsin from Kasaragod, southern Indian state of Kerala. It was also suspected that another Indian national, a Muslim Sajid Kuthirummal was involved in the deadly Gurdwara attack that killed 25.Some recent developments related to Afghanistan with Indian connections are noteworthy.

First, Indian officials in the national security agencies and South Block are convinced that Pakistan has embarked on a tit-for-tat designation of Indian nationals as terrorists under the UN Security Council’s 1267 Al Qaida Sanctions Committee. Pakistan, with the support of China, had moved the 1267 Al Qaida Sanctions Committee to designate two Indians as global terrorists after accusing them of past terror attacks in Balochistan and Peshawar, and even registered FIRs against them. This takes to four the number of Indians identified as terrorists by Pakistan.

All the four persons were evacuated by Indian security agencies from Afghanistan, with the last one being flown out of Kabul on 18 November, 2019. India seems to have forgotten Kulbhushan Jadhav who is in Pakistani custody. Pakistan has captured many RAW operatives involved in anti-state acts and will be handling them as per law of the land. Moreover, cases related to J&K cannot be equated with Balochistan and the mainland Pakistan. While one area (IOK) is internationally accepted as disputed, allowing locals to protest and resist the occupation, the others (Balochistan and KP) are not.

Second, in a move to counter Pakistan in the region, India and Afghanistan have formalized an extradition treaty that will enable extradition of alleged Pakistani terrorists operating out of the Afghan territory. Ambassador Kumar and Acting Foreign Minister of Afghanistan Idrees Zaman exchanged Instruments of Ratification of India-Afghanistan Extradition Treaty. The extradition treaty was first signed in 2016 when President Ashraf Ghani visited India.

The operationalisation of the treaty will enable India in principle to extradite alleged Pakistan-origin terrorists from banned groups who operate from the Afghan soil. But there are no Pakistani terrorists in Afghanistan. In essence it is the TTP, a proxy of NDS and RAW that went on a terror spree in Pakistan. Pakistan has always maintained that the Afghan soil is being used against her, evidence of which has been shared with the UN, US, India and Afghans too. This is exactly the reason why Pakistan’s fencing border with Afghanistan has created panic in Kabul and New Delhi.

Harsh V. Pant and Avinash Paliwal, two analysts of Indian origin, have stated in a US publication: “India’s Afghanistan policy is not driven by ideological or humanitarian concerns. It is driven by a desire to limit Islamabad’s influence in Afghanistan.” They say among other factors, this is because increased Pakistani influence in Afghanistan may lead to a reduced Indian presence. They further write: “India’s room for maneuver in Afghanistan is constrained by structural aspects, such as its limited material capacities, reputational concerns, and lack of geographical contiguity. Unlike the United States, for instance, India does not have the financial resources to support state building in Afghanistan.

New Delhi requires partners both outside and inside Afghanistan to protect its presence and interests in the war-torn country. That led to an alliance with the Afghan communists in the 1980s, alongside the Soviet Union, and a similarly futile effort in the 1990s, when it threw its weight behind the so-called Northern Alliance with support from Iran and Russia. India’s latest choice of partner has been the Kabul government alongside the United States. Since 2001, under the security umbrella of US-led NATO forces, India has built a sizable developmental and considerable intelligence footprint in Afghanistan, spending more than $2 billion in aid and infrastructural development, and reopened consulates across the war-torn country.”

Ajit Doval, the Indian security chief, has narrow focus on diplomatic issues and foreign policy and is fond of covert action, which he has defined as “a low cost sustainable offensive with high deniability aimed to bleed the enemy to submission.” This is how he has been playing with India’s foreign policy towards Pakistan, especially through Afghanistan.

Meanwhile, Indian terrorists are making their presence known in the region. Eight Sri Lankan suicide bombers carried out coordinated blasts across the island nation’s capital city, Colombo, and the western and eastern coasts on 21 April, 2019 killing over 250 people. The bombers had links to south India. Besides Pakistan, other countries of the region are also facing the onslaught of Indian terrorism. More significantly, India is not a victim of terrorism, it is the mastermind of terrorism.