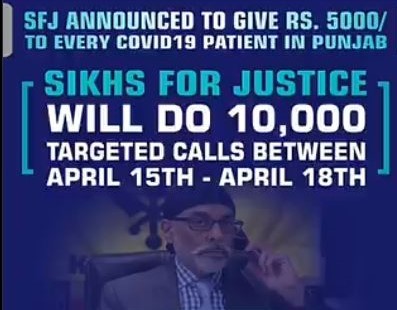 Pro Khalistan organisation Sikhs for Justice has come up with a noble cause to provide help of Rs2,000 for Coronavirus positive persons in the state of Punjab and asking people if they support SFJ or the governments led by Prime Minister Narendra Modi and Punjab CM Amarinder Singh,

For the past many days, recorded interactive voice response (IVR) messages of SFJ legal advisor Gurpatwant Singh Pannun from phone numbers having US ISD code are making their way to mobile phones of residents of Punjab, including lawyers, the top police officers, media and others.

Punjab police has booked Gurpatwant Singh Pannun and SFJ in false cases of making automated phone calls and instigating people against the curfew imposed by the state government to curb the spread of coronavirus.

Kumar said the police had earlier got blocked one of the numbers, but Pannun started using another number to send the recorded voice messages.

Police have also suspected that the recorded messages are being routed through some call centre.

“We took up the issue with telecom operators and recently got one such number blocked which was being used to send such recorded messages. Now, he has started using another number to send the messages. Centre is already aware of the issue and we are taking it up again,” said Kumar.

Advocate Divyadeep Walia tweeted: “@PunjabPoliceInd  sir, today i had received two voice calls from international number by some gurpatwant singh pannu of some ‘sikhs for justice’ organisation claiming votes to free punjab from india and planning to topple congress government in punjab and Modi government in centre.”

The Indian government earlier banned pro-Khalistan outfit Sikhs for Justice (SFJ) for a period of 5 years due to its popularity among the youth.

The SFJ pushes for Sikh Referendum 2020 as part of its separate nation for sikh programme .