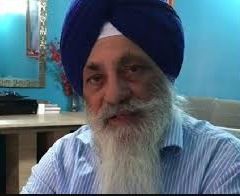 Separatist leader Jaswant Singh Thekedar has condemned the brutal attack on Sikhs who had gathered to offer prayer in Kabul gurdwara and has requested the Indian government to shelter the remaining families of Sikhs and Hindus from Afghanistan.

Thekedar is the founder of Dal Khalsa – a Sikh separatist organisation.

On Wednesday, armed terrorists killed 25 civilians in a terror attack on the 400-year-old Gurdwara in Shor Bazar in Kabul.

The Islamic State affiliate in Afghanistan claimed responsibility for the attack, but many experts believe that Pakistan’s spy agency, the Inter-Services Intelligence (ISI), propagated it to oppose Ashraf Ghani, who was re-elected as the President of Afghanistan last month.

In a video message, Singh said, “In Afghanistan, the way the Taliban carried out a barbaric attack on the Sikhs in Kabul’s historic gurdwara and killed children and women who were praying for the people affected by coronavirus pandemic is highly condemnable.”

“The attackers are not religious people and they have no humanity. They have only one motive to call others as ‘kafirs’ or infidel and kill them. It is also preached in their holy book. This is an unforgettable incident for the Sikhs,” he added.

The separatist leader also stated that he has requested the Indian government to allow the remaining Sikhs and Hindus from Afghanistan to get them settled in India.

“Our request has been accepted and after the COVID-19 crisis. Whoever will apply for a visa, the Indian government will facilitate them,” he said.

“We are thankful to the Indian authorities. We are also reaching out to the victims’ families with all possible help. We are your brothers. The horrific attack has happened on the entire Sikh community. We all stand together with your pain,” Singh added.

The Sikh community in the war-torn country that once constituted a vibrant, well integrated and economically active part of the Afghan society has been persecuted and driven away, since the Taliban grabbed the reins in the 1990s.

Their depletion has been so rapid that of the once close to a quarter of a million population, only a minuscule 1000-odd still remain in the country, barely eking out a livelihood amid extremely violent circumstances.