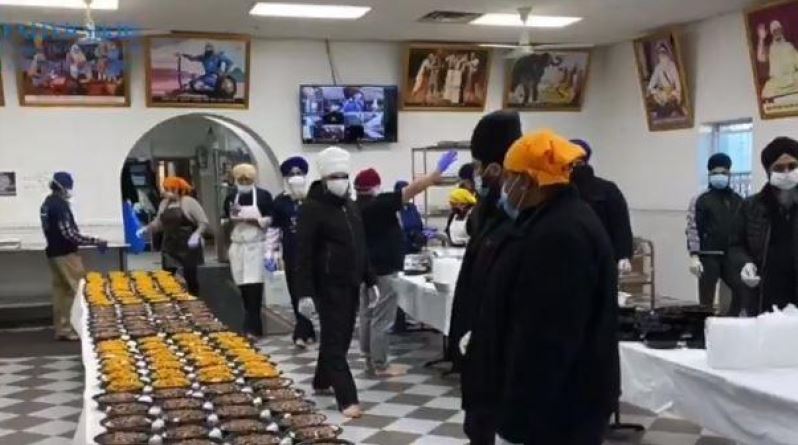 Sikhs around the globe knows the importance Sewa, or “selfless service” so volunteer from the community 30,000 free meals for people in isolation due to coronavirus outbreak in New York. During a time of global crisis, sewa from everyone is more needed—and appreciated—than ever.

Knowing the impressive capacity for service in the Sikh community, the New York Mayor’s office reached out to New York Sikhs with a request for food packages. The Sikh Center of New York kicked it into high gear, preparing and packaging more than 30,000 home-cooked vegetarian meals for Americans currently self-isolating.

Beans, lentils, and rice were cooked in humongous pots before being served into to-go containers to be distributed to elderly and immunocompromised people in isolation. Strict food hygiene practices were observed, and social distancing measures practiced as much as possible during the food preparation.

“The meals were prepared on Sunday and was packaged and loaded for delivery, ” Himat Singh, coordinator of American Gurudwara Prabhandak Committee (east coast) told Asian News International (ANI). “The distribution starts on Monday in the morning, by local authorities. Volunteers who prepared and packaged the meal had a medical check and have been approved by physicians and health authorities.”

Sikh communities across the nation have stepped up to help out their neighbors.

“Once we heard people were having a problem with food when they go shopping, they can’t find food in the shopping center, then we started reaching out to people in our personal capacity in the Bay Area.” Dr. Pritpal Singh, coordinator of American Gurudwara Prabhandak Committee (west coast) told ANI.

Sikhism is a monotheistic religion founded in India in the 15th century. There are about 27 million Sikhs in the world. More than three quarters live in the state of Punjab, India. Approximately 500,000 Sikh live in the U.S., primarily in California, New York, and Washington state—all hard-hit areas in the coronavirus outbreak.