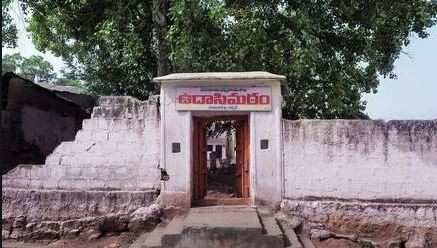 Udasi Mutt to be converted to a Wedding Hall

The Udasi Mutt, considered to be the place of the founder of Sikhism, Guru Nanak Dev is a devastated ruin, much in contrast from its glory dating back to the 17th century. One can have a good look at this from the old Nirmal Fort, just atop the Mutt. Now though, both of these are pretty much unrecognizable.

Followers of Sri Chand established mutts at all the places visited by Guru Nanak, in this instance during his second Udasi between 1511 CE and 1513 CE. The Udasi Mutt in Nirmal town is among those built around 1822 in the Deccan by Dewan Chandulal, who was the Prime Minister for Nizam, Asaf Jah III, a follower of the Udasi sect of ascetics which was based on the teachings of Guru Nanak’s elder son Sri Chand.

Udasis were the missionary travels of Guru Nanak. There were multiple heads of the mutts in the past, the last one being Baba Jwaladas, who died in 1969. During its heydays, the mutt comprised a hall and two rooms on both sides. The hall was the prayer room consisting of a Shiva lingam and an idol of Goddess Durga. Now though, the mutt only has three large and minor indistinguishable tombs on its flattened ruins under the shadow of an old banyan tree. The piece of land it owned came under the control of the Endowments Department in the 1980s.

Now, Endowments Minister A. Indrakaran Reddy, the local MLA, has put into action a plan to construct a wedding hall in the place belonging to the Udasi Mutt.

This is extremely unfair to members of the Sikh community as the Udasi Mutt is a great link to Guru Nanak and has a lot of significance for Sikhs. This comes as yet another blind eye to matters that are important to Sikhs and how they are just thrown away at their whims and fancies.