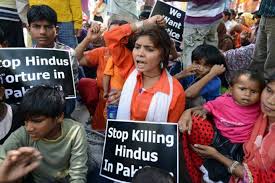 The State of Pakistani Hindus

It isn’t new for mankind to dehumanize their own kind – be it the Blacks in America, the apartheid in South Africa or the ill treatment of Sikhs and other minor communities in India. But there is one community that silently faces the wrath of an entire nation – the Hindus of Pakistan.

The Hindus of Pakistan were once a proud, vibrant community, who bore the heritage of an ancient civilization that flourished on the banks of the Indus River. They stood their ground as one invading army after another passed by on their way to subjugate India, even as their numbers dwindled by killings and forced conversions.

Prior to 1947, Hindus constituted between 14% to 23% of the population of today’s Pakistan, much higher than the current percentage of Muslims in India. Cities like Karachi (about 50%) and Lahore (roughly 30%) had sizeable number of Hindus. Today, as per the 1998 census, Hindus comprise a mere 1.6%.

Life for a Pakistani Hindu from birth to death is an ordeal of indignity, humiliation and insecurity bereft of even basic human rights. Discrimination is an institutionalized phenomenon endorsed by the Constitution, taught in schools and facilitated by the police and courts.

The Global Human Rights Defence (GHRD) estimates that more than 1,000 Hindu and Christian girls are kidnapped and forced to convert to Islam annually. The Human Rights Commission of Pakistan (HRCP) indicates that about 20 to 25 girls are abducted every month.

Shockingly for nearly 70 years after Pakistan became a country, there was no law for registration of Hindu and Sikh marriages. This made Hindu and Sikh women vulnerable to abductions and forced marriage.

Post the demolition of the Babri-Masjid in 1992, 120 Hindu temples were destroyed. Of the 428 Hindu temples at the time of Partition, 408 of them have been converted into various commercial buildings. The iconic Varun Dev Mandir in Karachi, which is estimated to be 1,000 years old is now being used as a toilet. Only 20 major Hindu temples now remain operational.

According to rights groups, around 1,549 blasphemy cases have been registered in Pakistan between 1987 and 2017. More than 75 people have been killed extra-judicially on blasphemy allegations.

The life of a Pakistani Hindu is spent in fear and an existential identity crisis. They have limited voting rights, have to go through the ordeal of their marriages not being recognized and stand the risk of being charged with blasphemy at any given point of time.