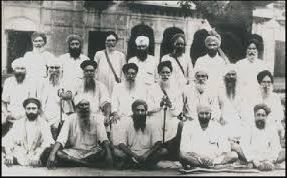 REMEMBERING THE FACES OF THE GHADAR MOVEMENT

In an event that happened over a hundred years ago on the 16th of November, 1915, seven patriots were hanged to death after the culmination of what became popular as the first Lahore Conspiracy Case. These included Bakshish Singh, Jagat Singh, Vishnu Ganesh Pingle, Surain Singh s/o Boor Singh, Surain Singh s/o Ishar Singh, Harnam Singh and Kartar Singh Sarabha. Their death was a step towards the efforts of the Indian government to curb the war declared by the Ghadarites on the colonial government.

Little was it known then that these trials would go on to have an enduring impact on the psyche of Punjab and reverberations on India’s history.

Events that led to Ghadar

A week after Britain declared war on Germany on August 4, 1914, all overseas Indian readers were asked by Britain to return to their homeland and fight, stating this would be their contribution to help free their country from slavery. This call was first appeared in Ghadar, a weekly newspaper published from San Francisco.

Patriotic Punjab migrant workers, driven by the love for their immediately jumped onto the bandwagon. At the heart of the movement was the Punjabi farmer-soldier-turned-labourer abroad, driven out by the accretion of economic problems at home.

During the first decade of the 20th century, 5,000 Indians reached Canada. Out of these more than 90 per cent were Sikhs. The harsh racial differentiation, violent attacks by white labourers and hoodlums led to a feeling of humiliation and shame among these Indian migrants. They believed they were subjected to this treatment because they were citizens of a slave nation.

Numerically the Ghadar was largely a Sikh movement, which was no ordinary movement neither in its scope of influence nor its tactics. Maia Ramnath has observed in her book, Haj to Utopia that the Ghadar’s printed material served as connective tissue or switching circuit, capable of linking various elements among the Indian radicals abroad. It also linked Indian radicals to other networks, and also connected pre to post-war revolutionary movements inside the country.

This movement in its overall assessment has been termed as a “heroic failure” by Ghadar historian Harish K Puri. Although it largely failed to impact the colonial government in ways its members had originally anticipated, its cultural reach extends to this day.

A struggle like Ghadar which failed in its overall objective and did not gain the large-scale support of the citizenry has a tendency to be relegated into historical insignificance. However, this is the exact reason why it must be remembered that not every battle is about victory.

In line with Kartar Singh Sarabha’s daring conviction ‘the blood of martyrs never goes waste’, the failure of the Ghadar Movement proved to be a landmark in the struggle for freedom. It inspired the likes of Bhagat Singh who considered Kartar Singh Sarabha his role model towards a revolutionary change.

It is our honor and duty to remember their martyrdom and use it as a path for the future we aspire to as a society and a country.