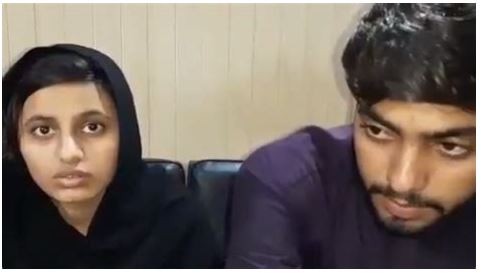 By The Sikh Daily Team on January 10, 2020
Advertisement

Jagjit Kaur, the Sikh girl from Pakistan who was allegedly forced to embrace Islam and marry a Muslim man in August last year, Thursday told Lahore High Court that she does not want to go to back to her parental house.

Jagjit Kaur is the daughter of a head granthi at Tambu Sahib gurdwara in Nankana Sahib. She was rechristened as Ayesha after her alleged forced marriage to Mohammad Hassan (19). Jagjit’s brother, Manmohan Singh, told The Indian Express Thursday that his sister had been “brainwashed” and was feeling “afraid and traumatised”.

“Oh dar rahi hai, oh khauf vich hai (She is afraid). She is being threatened that we will be eliminated if she does not act according to their instructions. We will go and meet her on January 11,” said Manmohan, adding that he met Jagjit for ten minutes on Thursday along with their father Bhagwant Singh. The court has now fixed January 23 as the next date of hearing. Jagjit’s counsel Sheikh Sultan told The Indian Express over phone that the court has allowed meetings of the girl and his family members, her father and her brother before the next date of hearing.

He added: “The court has given ten working days to the girl to make up her mind after she said that she wants to go with her khaavind (husband) Mohammad Hassan (19). Till the next date of hearing on January 23, the court has sent the girl back to shelter home in Lahore.”

Last week on Friday, Hassan’s brother Imran Ali Chishti had led a mob that pelted stones at Gurdwara Janam Asthan, the birthplace of Sikhism’s founder Guru Nanak Dev. Threatening Sikhs at Nankana Sahib, Chishti had expressed anguish at the alleged harassment of his family members by local police and civil authorities. In a video clip, he was heard saying that no Sikh would be allowed to live in Nankana Sahib and that the name of the town would also be changed. Chishti was arrested on Sunday night and booked under Pakistan’s anti-terrorism act.

Jagjit’s family has alleged that six armed persons, including a woman, had barged into their house and kidnapped her, and later forced her to “embrace Islam and forcibly marry Hassan” on August 28 last year. A case of abduction was registered on the complaint of the family of the girl. Sultan, however, says the abduction FIR was quashed later.

Jagjit’s brother, Surinder Singh, had threatened that family would immolate themselves outside Governor House on August 31, if Jagjit was not returned to the family. Later, a video appeared on social media where Jagjit Kaur while answering questions, probably at the time of getting married, said she had embraced Islam and decided to get married as per her own will. She added that she was 19 years old and did not bring any valuables from her parents’ house.

The family of Jagjit had approached court saying that she was minor and produced her school certificate to claim that she was 15 year and nine month old. “But, as per a government record she was 19 years. On the directions of the court, her bone ossification test was conducted under the supervision of Medical Superintendent which showed that she was between 18 and 19 years of age. So girl’s parents’ plea was dismissed by court,” Sultan had said earlier.

Sultan said that Thursday’s hearing was in connection with an application moved by Jagjit in the court where she sought to be “freed” from shelter home. The next date of hearing in the case is now on January 23.