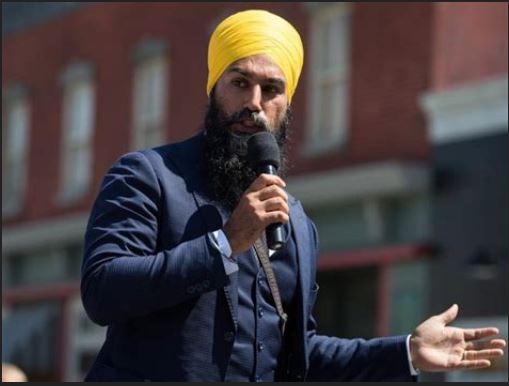 By The Sikh Daily Team on December 26, 2019
Advertisement

The New Democratic Party leader Jagmeet Singh said that is was “wrong and should be denounced”.

Jagmeet Singh tweeted saying, “The Indian government’s new Citizenship Amendment Law purposely discriminates Muslims and other minority communities. It is wrong and should be denounced.”

He further added, “At a time of rising hate & polarization, governments should work to unite people, not divide them.”

The Indian government’s new Citizenship Amendment Law purposely discriminates Muslims & other minority communities. It is wrong & should be denounced.

The statement did not go down so well with netizens and they later slammed the Canadian leader. Twitterati also branded him ‘Khalistani’ tag.

A user on Twitter said, “Canadian Khalistani, CAA leaves out Muslims & rightly so; no other minority, including Sikhs. Shows where your loyalties are.”

“Abey Canadian Khalistani, CAA leaves out Muslims & rightly so; no other minority, including Sikhs. Shows where your loyalties are,” said a Gitika, a twitterati.

“I do worry about this gentleman because his hatred against Hindus seems to have consumed him. What “minority communities” are you talking about Jagmeet? Do educate us. Even “other” makes no sense as Muslims are not a minority in PK, BD, AF. Glad Canada rejected this Khalistani.” Said harsh Gupta, another Twitterati.

“Amritsar in 1946 had 47% Muslims and only 38% Sikhs. When Amritsar was given to India,Sikh jatthas launched a brutal massacre which reduced Muslims from 47 to 1. You Sikhs became majority there by massacres. Now tears for same Muslims!” said Chandrapida”

Protests against CAA took place across the country, with students from various universities joining in. Several incidents of violence were also noticed with protesters detained, arrested and the use of power by police. The Jamia University protest was a major talking point with the police lobbing tear gas shells inside the university premises. Several students were injured. Police personnel were also injured. North East’s Delhi Seelampur also witnessed violent protest, in which protestors resorted to stone-pelting.

According to the Citizenship Amendment Act (CAA), members of Hindu, Sikh, Buddhist, Jain, Parsi and Christian communities who have come from Pakistan, Bangladesh and Afghanistan till December 31, 2014 following religious persecution there will get Indian citizenship.