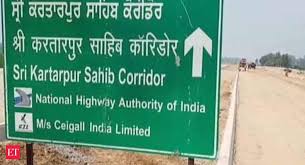 No transport on 4-km road leading to Kartarpur corridor

In a major negligence by Indian government, no arrangements of public transport facility has been made yet for the pilgrims on the 4km long national highway leading to the Kartarpur corridor though it was opened couple of weeks ago.

The border town that has historical and religious relevance and has been in a state of neglect for the last 72 years due to its proximity with the international border already has limited transportation facilities.

Though Punjab roadways and private bus services run buses to Dera Baba Nanak from Amritsar, Batala, Gurdaspur and Ramdas, but even the local bus stand is around 2km away from the passenger terminal building of the corridor and the stretch has streets and narrow lanes.

However, if buses are to be run from the bus stand to the terminal, they have to cover a distance of 4-5 kms, because they cannot pass through the streets and narrow lanes, which are shortcuts to the terminal.

Similarly, there is no mode of transportation to ferry pilgrims from the railway station to the corridor.

The national highway has been constructed from the bypass to the zero line or passenger terminal on the outskirts of the town.

For those who arrive here without any conveyance, there is no facility of transportation, not even rickshaws or auto-rickshaws. They have to reach the passenger terminal on foot. “Transportation is basic need of the pilgrims. This should be priority of the administration,” said Sukhdeep Singh Bedi, a local social worker.

Shiromani Akali Dal (SAD) leader Inderjit Singh Randhawa said, “It is difficult for the pilgrims to cover such distance on foot. Its twilight by the time they return after paying obeisance at the Kartarpur shrine and there is hardly any transport at the bus stand.”

“We cannot run buses on the national highway without permit. Though we have applied for it, but the low footfall worries us. It would be only appropriate to start the transportation facility for the pilgrims, once we are assured about the average number of the pilgrims,” said Darshan Singh Gill, general manager of Batala depot of Punjab roadways.

As far as transportation from Dera Baba Nanak to Amritsar, Gurdaspur and Batala is concerned, the buses plying on these routes are in line with the number of passengers, he said. We will increase the buses if there is surge in pilgrims rush in future, he added.

Dera Baba Nanak sub divisional magistrate (SDM) Gursimran Singh Dhillon could not be reached out over his phone.

“Apart from the state government, the Shiromani Gurdwara Parbandhak Committee (SGPC) should also make arrangements for ferrying the pilgrims who arrive here a day before their visist to Kartarpur and stay in sarai of the gurdwara here,” added Randhawa.