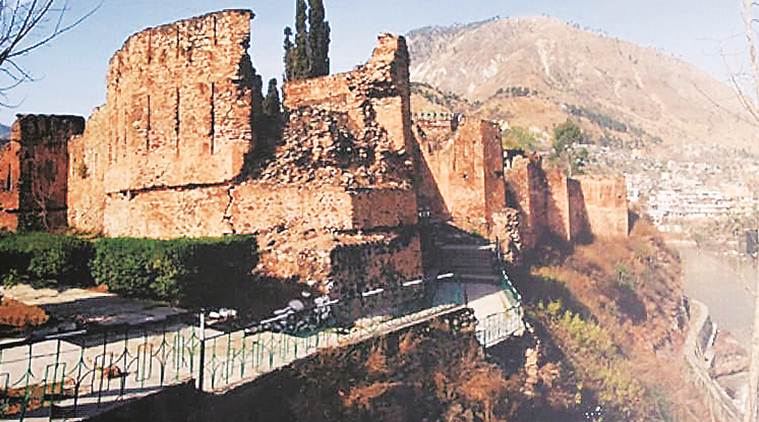 While India lacks a complete list of such sites in PoK, owing to limited access, as per a study conducted by a team of Pakistani archaeologists in 2014, it has about 100 archaeological sites.

Pakistan occupied Kashmir resurfaces in government talk post-abrogation of Article 370 in J&K, in perhaps the first such display, the National Monuments Authority exhibited in Delhi 28 photographs of heritage structures, including forts, mosques and shrines, in PoK built by Mughal, Dogra and Sikh rulers. The list of “Cultural Heritage Sites in PoK” covered the districts of Bagh, Bhimber, Haveli, Kotli, Mirpur, Muzaffarabad, Neelum Valley and Sudhanoti. While India lacks a complete list of such sites in PoK, owing to limited access, as per a study conducted by a team of Pakistani archaeologists in 2014, it has about 100 archaeological sites. The Indian list has been culled out from pre-Independence records with the Archaeological Survey of India and various religious bodies, and some books and journals. Among the sites exhibited are:

Located off Gilgit, this seventh-century archaeological site comprises a carved image of a large standing Buddha on the cliff in Karghah Nala. Nearby locales include Barmas village and Rakaposhi mountain. From the 3rd century to the 11th century, Gilgit was a Buddhist centre. A few metres away, a Buddhist monastery and three stupas containing Sanskrit manuscripts were also found during an excavation in 1931. However, as per a local legend, the 50-feet-high figure is a man-eating witch who terrorised the residents and was ultimately pinned to the cliff by a pir.

A popular place of worship for Sikhs in Ali Baig village, the gurdwara was turned into the Muhammad Yaqoob Shaheed High School for Girls, as per a report by Pakistani archaeologists during the 2014 study. Located on the northeastern side of the Mirpur-Jhelum link road in Bhimber tehsil, the three-storey building also served as a refugee camp for three years, then a police station, a soap factory and a primary school for girls. The gurdwara’s domes have been decorated with lotus flowers and can be seen from a distance.

Fountains and Gardens of Khuiratta

Khuiratta is situated in Kotli district, just 7 km away from the Line of Control. Khuiratta and its surrounding areas are very popular among local tourists, with the shrine of Mai Totti Sahiba a venue for an annual three-day fair. People from Kotli and other adjoining districts attend the festival in spring to watch sports, animal parades and horticultural displays. The area has a number of natural springs and waterfalls. It is believed to have been an important place of worship for Hindus during ancient times.

Known among the locals as Rutta Qila or just qila, this site in Muzaffarabad was built by the Chak rulers, who anticipated threat to the city from the Mughals. The construction began in 1559. However, the Mughals annexed Kashmir in 1587, and the fort lost its importance. Later, its construction was completed in 1646 by Muzaffar Khan of the Bomba Dynasty, the founder of Muzaffarabad. Its architecture shows great craftsmanship, but most of the fort’s relics were stolen and a large portion was destroyed during the 2005 earthquake.

Located on a hilltop on the banks of the Mangla Dam lake, the fort is accessible through boat from Dina town, or an 80-km road trip from Mirpur. The three sides of the hilltop are surrounded by the Jhelum River, which falls into the huge reservoir of Mangla Dam. It was built in the 16-17th century by a Gakhar named Toglu as recorded by traveller and geologist Frederick Drew in his book. Gakhars were a clan from the region renowned for their skill in building forts and fortified cities.

The much-revered Hindu temple, located in the Neelum Valley, is an ancient centre of learning dedicated to the Hindu goddess Sharada. There used to be an annual pilgrimage by Kashmiri Pandits to Sharada Peeth, but it was stopped after Independence. In fact, at the inauguration of the exhibition at the NMA, Minister of State in Prime Minister’s Office, Jitendra Singh, said, “Like (in the case of) Kartarpur, ministries concerned will take up the issue with Pakistan to see if this yatra can be resumed.” The temple-university played a key role in the popularisation of the Sharada script in North India, and Kashmir was sometimes called Sharada Desh because of its influence as a centre of learning. Its origins are uncertain — while some historians believe it was built under the Kushan Empire in the first century, others say it was built by Lalitaditya of the Karkota dynasty.