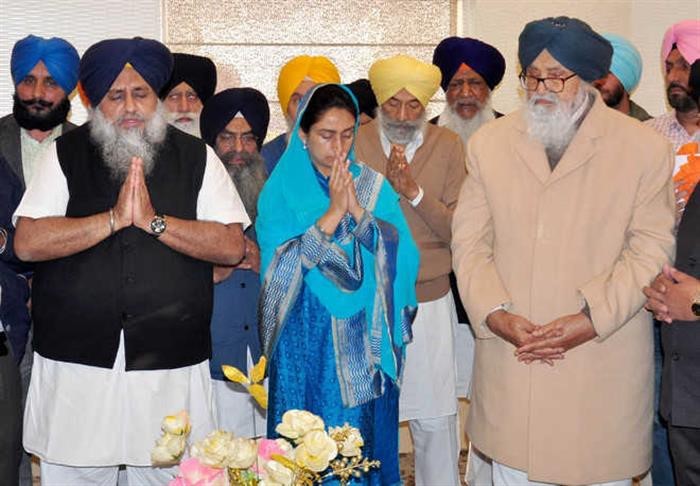 CHANDIGARH: The decision by Badal family to atone their ‘sins’ and perform ‘religious service’ (sewa) in Sri Harmandir Sahib Amritsar has brought the role of Sikh clergy under scanner for ignoring the ‘sins’ of Badal family and allowing them to bypass the authority of Akal Takht, the highest temporal seat of Sikhs.

Now when Badal family has admitted to their unstated ‘mistakes’, Would Akal Takht Jathedar Giani Harpreet Singh summon them to appear before the Sikh clergy to examine the gravity of their sins and declare them Tankhaiya (Guilty) and award suitable punishment.

Badal family members Parkash Singh Badal, his son Sukhbir Singh Badal and his wife Harsimrat Kaur alongwith Bikram Singh Majithia and SGPC president Gobind Singh Longowal have started sewa at the Golden Temple to revive their lost political ground among Sikhs who distanced from Badal family due to over 100 cases of sacrilege of Guru Granth Sahib, shielding the culprits and ordering firing on Sikhs sitting on protest in Bargari.

It is first major chalenge for newsly appointed Akal Takht Jathedat Giani Harpreet Singh to revive the authority of his seat and to restore Panthic order. The Badal family has bypassed the authority of Akal Takht by offering prayer and sewa at Sri Harmandir Sahib to seek pardon for their ‘mistakes’. They should present themselves before the Akal Takht, admit their ‘sins’ and accept the religious punishment awarded to them by five Sikh high priests. Badal family had outsmarted Akal Takht and Sikh community by offering religious service at their own. Badals have not told the Sikh community which are the ‘mistakes’ they have made which they want to atone?

In the past many high SAD leaders and Sikh politicians were either summoned by Akal Takht to appear before Akal Takht for the religious misconduct or they have surrendered before the authority of Akal Takht to seek pardon. Those disobeyed the order of religious authority were excommunicated from Sikh Panth till the time they accepted religious punishment. The only example in the history, when an excommunicated Sikh was exonerated by without even seeking apology was case of dera sacha sauda chief Gurmeet Ram Rahim Singh. It was one of the biggest ‘sins’ committed by Badal family.

In the past history, former SAD president and Chief Minister Surjit Singh Barnala who had allowed security forces enter the Golden Temple during ‘Operation Black Thunder’ in 1986 was held guilty by the Akal Takht. He was declared ‘tankhaiya and excommunicated from the Sikh community by Akal Takht. Five years later, he submitted before the Sikh clergy and was made to repent by performing a 21-day ‘sewa’ that included cleaning pilgrims’s shoes and washing utensils at the community kitchen in the shrine.

Buta Singh: The former Union home minister earned the Akal Takht’s wrath for his role in Operation Bluestar in 1984. He was ex-communicated from the Sikh community. He appeared before the Akal Takht after Ten years and was let off after atoning for his “sin”.

The chief of a Nihang faction who took up the ‘kar sewa’ of the severely damaged Akal Takht building soon after Operation Bluestar. The Sikh clergy disapproved his act and declared him ‘tankhaiya’. In March 2001, Santa Singh appeared before the Sikh head priests and apologised. He was asked to do ‘sewa’ at all five Sikh Takhts and then pardoned.

Jagdev Singh Talwandi: A former president of the Shiromani Akali Dal, he was punished for defying the Akal Takht’s directive on unity in Akali factions. Talwandi atoned for his indiscretion in 1979 by doing ‘sewa’ and was pardoned.

In the recent history Bikram Singh Majithia who committed blasphemy in 2014 by misquting a couplet from Bani of Guru Gobind Singh ji during a BJP election rally had appeared before Akal Takht and sought an apology. To repent, he washed utensils and cleaned shoes of pilgrims at Golden Temple. He was pardoned.